So I am in Lafayette, Louisiana looking at everyone’s bodies like I always do. There is a distinctive corporeal type for men in Louisiana; they are tall, top-heavy, blocky, with a belly that protrudes as they sit back on their heels, which are usually clad in cowboy boots. At the same time, they are graceful and comfortable in their own skin, despite the baseball cap and ill-fitting t-shirt tucked into high waist jeans. These men are rough looking but incredibly friendly and polite. Best of all they will readily hit the dance floor with their ladies, gently guiding them to a spot in front of the fiddle player. Oh how I envy them right now, as I sit at a table at Randol’s Restaurant and Salle de Danse, full of blackened catfish and gator bites, tapping my foot and wishing that my partner was here. He would not want to jig or waltz with me, but Iwould pull him onto the dance floor and he would finally agree in his good natured way, especially if I had managed to get him a little drunk beforehand. Aside: it is rather easy to get him tipsy and then take advantage of him. But if you try it I will find you and I will stab you. I remind him of that every now and then. If he runs off with  another woman, I won’t get angry. I won’t cry. I will simply stab them both, probably to death. I say this calmly while looking him in the eye to make sure that he is paying attention. Speaking of stabbing, a man originally from Idaho told me that the murder rate is very high in Louisiana precisely because of the ever-present and obligatory hospitable politeness here. Residents do not express anger or dismay, letting it all build up until they finally snap and then start slicing and dicing. All I can say is ‘I feel you, mes cousins.’

So the University of Lafayette Campus has a swamp in the middle of it, right across from the Student Union Building, and yes it is filled with gators. Does it have a high fence surrounding it, you may ask? Well, there are some one-foot high concrete barriers, and they are used as benches. I ate my lunch there, while ocassionally looking over my shoulder, just in case… 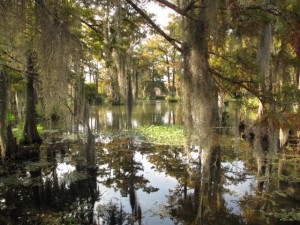 Back to Randol’s. I am here with international historians of France and its former colonies, as well as of the Acadian diaspora, which is occasionally fascinating. Many of these academics are nerdy men. And oh are they serious. Their bodies are markedly different from those of the locals. They are stiffer, with narrower chests and a more goal-oriented gait. They wear shirts with buttons and collars and some of them even have jackets. I won’t mention the shoes. Or the glasses. Don’t get me wrong, I love them all. My sister and I recently discussed how once we turned 40 our standards plummeted and we now find almost every man attractive in some way. (For instance, just last week I thought to myself, if that Eastern European guy was not wearing long black socks with his white running shoes and baggy, stained jogging pants, and if I were single, I would probably do him. Sure, why not?) Still, I prefer the unkempt Cajun men to the uptight oh-fuck-I-must-get-tenure academics. My relaxed partner would fit in well here for he is self-assured, embraces the corporeal, and likes giant t-shirts. I bought him one for $9.00 at the Lafayette Target (pronounced Tarjay) with a Twinkie on the front. It says ‘it’s what’s inside that counts.’

But we know that’s a lie right? The external is everything, and yes my guns are somewhat loaded. They won’t stay that way for long if I keep eating all this rich and wonderful Cajun food. So far I have consumed copious amounts of gumbo, buttermilk biscuits, pecan pie, crawfish etouffee, shrimp remoulade, dirty rice, boudin balls, smothered okra, roux in various formats, and andouille. Some people at the conference actually complimented me on how much food I can pack away. I said thanks as I pushed them aside and stampeded back to the buffet. They nevertheless persisted, wondering how I got my high metabolism. I was boiling to death inside the Hilton while everyone else was cold; well, at least all the French lady scholars were cold. More muscle=higher metabolism I guessed out loud. Several of them then asked me for work out tips, especially methods for shrinking that hanging upper-arm flab. ‘Lift heavy weights to failure for 1.5 hours a day,’ I advised, while sagely rubbing my two-stubby haired chin. (Note to self: must cross that dangerous road that lacks sidewalks and crosswalks tomorow, and buy tweezers at the CVS). My colleagues looked dismayed. But why? Wouldn’t that be more fun than figuring out how to translate ‘suffocation of the womb’ from seventeenth-century French into twenty-first century English? More fun than painstakingly writing and then practising a paper about the life-cycle of peasants in eighteenth-century Poitou, only to have three sleepy people show up to listen to it in that room named after a tree down in the basement of the hotel?

Being here makes me realize how uptight I am. I am so formal and restrained compared to the locals. Yet I am far less formal than most of the professors participating in this conference. I wore a tank top to the first session, for example, and made no effort to hand out my business cards or blather on about my work as a form of self-promotion. During the swamp tour organized as part of the conference, I was chatting with a Russian scholar when she noted that the non-Southern Americans never really stopped talking about their work; they were always working it. At least I think that’s what she said; it was difficult to understand her English. In any case, in contrast, the Southerners knew how to have a good time and cut a rug. As soon as the music started, no matter where we were or what time it was, they kicked up their heels and tossed back their gray hair, like glorious unicorns. The rest of us sucked on the dance floor. Obviously professors should know how to dance. In fact, I am going to add that to the new PhD program in our department, which highlights the professionalization of students. Students will not graduate until they have learned how to: 1) spot the most famous scholar at a conference and corner him or her for a few hours of boring conversation; 2) shake hands firmly enough to agitate the tendonitis of older professors; 3) get just the right amount of drunk at a post-conference banquet (this might take a lot of practice); 4) dance well but not in a wild-I-never-get-to-have-fun way at said banquet, with minimal disrobing. After all, no one really wants to see a professor body. Just put that thing away. Oh yeah, except that everyone will get to see mine in June. And if you think that you can avoid it, think again. I will post many pictures. Then I will find you and I will make you look at them. Rather get stabbed? Or attacked by these menacing cormorants at the Atchafalaya Basin Swamp?