For this rant, FFG and RenMan are joined by Guest Poser (GP), a 38-year-old, never married and currently single, hotly in shape tenured professor who has competed in two bodybuilding competitions. He wrote a guest blog called ‘Guest Poser’ on November 27, 2011. Go and read it, you bad ass bitches! 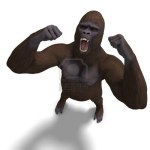 GP: October is a bad month. It is a time when we have no breaks and everything is due at once. For those who do not already know it, I am a professor like FFG. We share similar fields, but she seems to tell students the truth about how much they basically suck.

FFG: Oh I tell everyone that they suck. All the same, I am usually a reasonable, light-hearted person, right?

RenMan: For the most part, yes. Your morning personality is rumoured to be unreasonably sunny and prone to irritating levels of “chipperness.”

GP: Stuff chipperness. The other day, I was struck by the haunting feeling that students really don’t give a fuck. They literally do not appreciate anything that I do. My colleague described teaching the large class as an out of body experience where you watch yourself and hear two voices—one giving the lecture and the other saying “they don’t give a flying shit about you or your lecture.” I think that when you actually care about teaching, seeing kids less and less motivated can take a toll on you.

FFG: I hear that GP, and think that you are due for a bout of rowdy drunkenness. Too bad you are not in Edmonton, aka “party central” with us right now! 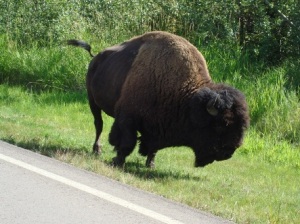 FFG: Despite the festive mood of my happening town, there are some things that make me doubt my sanity, filling me with instant rage or, conversely, with a hot flash of joy. The sound of a bike bell, for instance, will transform me from a person ambling down the sidewalk, humming a Ziggy Stardust tune, into a homicidal maniac. If you are foolish enough to ring that clackety silver contraption at me—for any reason—I will rip it from your tasseled bicycle handles and shove it down your quivering throat. How’s that for some 1970s retro style? 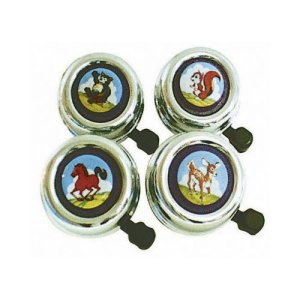 Even cute Disney creatures cannot save you from my crazed wrath.

RenMan: Tarantino would be proud. However, if he were to have you doing that, it would be while wearing a yellow and black leather suit, accompanied by some noise-pop/60’s-surf-influenced soundtrack from Indochina.

FFG: Plus is it really necessary to clink your metal spoon against the ceramic bowl precisely 172 times?

FFG: I understand that eating soup can be time consuming, but stretch it beyond three minutes and I will garrote you. This might be wrong. I don’t care. Shut up and order the salad instead. 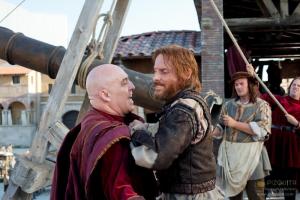 Every time Micheletto comes on screen in The Borgias, FFG thrills with delight, shouting “Watch out for foxy and his garrote!”

FFG: Right back to me and my irritations: “Hey lady behind me on the long airplane flight, why not consider developing some quad strength instead of hoisting yourself up on the back of my chair and then plopping back down? News bulletin: your body is not dead weight; it can be controlled by means of neurological signals.”

RenMan: Speaking of neurological, what the fuck is up with people and their goddamnable addiction to cigarettes? With all of the literature and authentic scientific research telling us just how fucking bad these things are, why do I continue to see young people lighting up? Would it help for people to know that when I see random people smoking in front of bars or while walking by on the street, I imagine myself somehow turning them into a pillar of flame, instantly incinerating the motherfucker and saving the rest of us their venomous stink? Is it bad that this actually makes me happy to think about? 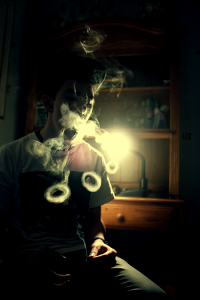 Hey you teens! Get off my lawn!

FFG: Thanks for discussing something more cheerful Ren. Our readers might be getting bored with group rant crankiness. I should admit that random experiences can make me intensely happy. I started enumerating them after noticing how my LSP’s face lights up whenever he is served breakfast in a restaurant. A look of utter bliss flickers across his face as he arranges the plate of bacon and eggs over easy with a side of brown toast, packets of strawberry jam, and accompanying coffee. I have captured this expression only once in a photograph taken of him about to tuck in while seated in the dining car of a train bound for Jasper, Alberta. I would include that image here, but my LSP has forbidden me from revealing on this blog site any parts of his body except the Lebanese man arms he had surgically attached to his Irish-Canadian stumps a few years ago. 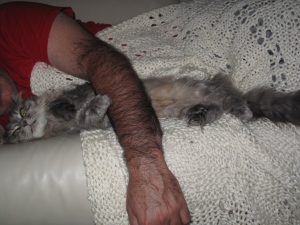 RenMan: He does have ridiculously hairy arms. Robin Williams has nothing on him. Well, maybe back hair.

GP: I think that being given the opportunity to write freely is something that most academics would treasure.

FFG: Yes indeed, which is why blogging is such a treat. Want to know what else makes me similarly giddy with happiness? The trolley. Whenever I see one of the historic tram cars operated by the Edmonton Radial Railway Society, I gasp and point, shouting “trolley, trolley!” In operation as a form of public transport between 1908 and 1951, these streetcars now carry thrill-seeking passengers such as myself across the High Level Bridge, one of the highest river crossings by streetcar in the world. Blame Mister Rogers and his trolley-enabled neighbourhood, but I adore all four of the renovated cars, regularly riding in the cute green one from Japan. Why does the trolley excite me so? Because within the bland boom-and-bust context of Edmonton, the historic street car offers a glimpse of uniqueness. I cling desperately to this positive landmark, identifying briefly with my place in the world. 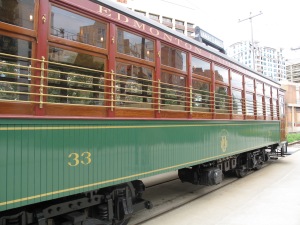 GP: So, this summer I felt pretty good when I focused on my diet and got super ripped. Part of me literally wants to go on a diet from say tomorrow until June 1. If I did I would try and stick with some basic supplements and not over do it. I’m the fucking original supplement slut. Anyway, as FFG will probably post some of my pictures, you’ll be able to tell when I dial it in I look great and in some ways I truly miss it. Maybe I’ll go back to it and do a few shows in 2013.

FFG: You should do it GP. Getting in stage-worthy shape is a massive accomplishment, and something to be really proud of. Luckily, I can be made irrationally happy by much easier things: the smell of fresh black licorice; woodpeckers of various sizes, especially the one I saw relentlessly banging his pointy beak against a brick wall. What a display of hopeless determination. My heart leaps every time I see a wild hare in Alberta, and at all fluffy things, including boys wearing oversized sweaters ineptly knit by female relatives. I adore animals that talk on TV, and thrill to discover a shop that sells my favourite candy, Cow Tales, filing the information away for a rainy day… 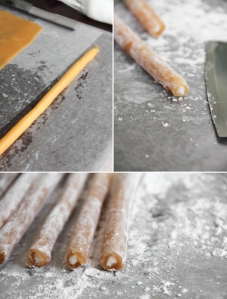 To my intense joy, I just found a cow tales recipe on line at www.sprinklebakes.com. Guess what you are all getting for Hallowe’en?

GP: Finding happiness in birds and candy is all well and good, FFG, but as you know, when you use your mind as much as we do, the feeling of using your body is incredibly great. And when you have a wonderful physique to show off like FFG or Fitbabe (I have a secret crush on her, but don’t tell her), it is the ultimate physical turn on. FFG can comment on that if she wants.

FFG: So I should tell Fitbabe that you are hot for her frame? I am not very skilled in such negotiations, having never dated myself. Is dating fun? Oh never mind.

RenMan: Uh oh, I have a confession to make…

FFG: Yes we know that you also have a hot body, Ren. No need to confess that. Just let me interrupt you to say that I am almost ashamed to admit my next happy-making example: I take delight in animated mini-wheat commercials. Those lightly frosted squares sure can dance and sing a catchy tune.

RenMan: I love Happy Feet. That little penguin dancing around makes me lose my shit every time I see him. Something about that whole movie makes me grin like an idiot, and it’s totally uncontrollable. I don’t get it – it’s one of the few things that has that effect! I see him doing his little tippy-tappy and I’m four years old all over again, experiencing pure bliss and joy that washes away years of built-up cynicism and anger. It’s unexplainable. 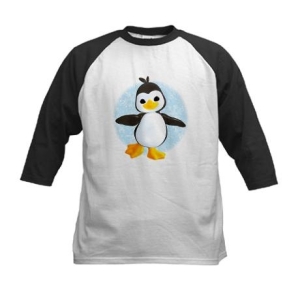 RenMan: You aren’t even listening anymore, are you?

FFG: Oh I remember every word that you say RenMan. That is not a good thing. I am heading out right now to buy you some Happy Feet jim-jams, you know, the kind with actual feet and a trap door? I will get Hulk Hogan ones for GP. That might cheer him up. That and liquor. 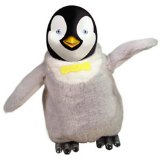 It’s hard for RenMan to work when his boss is so snuggly.