I did not have to look far to find a powerful vagina. One was within arm’s reach. I am referring, of course, to the sheela-na-gig maquette pictured above, purchased for me by a lady historian during her vacation in Ireland, and currently resting on my desktop. It radiates vulva energy towards me all day. Ah, how I bask in its healing rays.

Like other so-called sheela-na-gigs, this one gleefully exposes her juicy bits to viewers. Similar images of female figures gesturing towards, rubbing, or opening their exaggerated genitals were carved on Irish and English churches and castles during the Late Middle Ages. But why? That is a burning question, with many possible answers. Are these gals fertility goddesses or, on the contrary, do they provide warnings against female lust? The latter interpretation seems unlikely, for the grinning figures actively portray masturbation as one hell of a good time. The idea that they ward off evil is more convincing to me because many sheela-na-gigs are located on building exteriors, near windows or doorways. My other favourite explanation of these intriguing works of art is that they offer taunts to the Irish recently subjugated by Anglo-Norman conquest. Basically, a lifted skirt means “Hey loser, get a load of this!” Such genital mockery can occur today, though usually in dance clubs rather than places of worship. 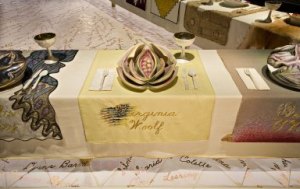 Gustave Courbet, The Origin of the World, 1866. I like the title, and the fleshliness of this image, but find the whole thing a little headlessly gynecological.

You may have noticed that the previous images are neither new nor well known. It is practically impossible to find more recent pictures of engorged and pulsing vulvas that could be considered empowering for women. In fact, exposed lady nuts are either linked with immanent danger for men—think Sharon Stone’s crossed and uncrossed legs in the film Basic Instinct—or with desperate attention-seeking behaviour—think Britney Spears’ nude hoo hoo as she clumsily exits a car, if you must.

Maybe Luce Irigaray was right. In her early work, namely Speculum of the Other Woman (1974) and This Sex Which is Not One (1977), the French feminist rejected genital ocularcentrism, that is, an approach to sexuality that emphasizes looking over such other senses as touch. An unwarranted emphasis on vision has, after all, privileged the penis/phallus, placing it at the centre of the symbolic order. An interest in looking and singularity tends to favour man-parts, leaving the lady side of things—all tucked away, neat and tidy—contrastingly associated with absence and lack. Irigaray argues that the vulva offers “two lips in continunous contact,” describing a sexuality that is always already in touch with itself, and always active, despite appearances to the contrary. The penis/phallus, on the other hand, is far less independent, requiring the mediation of a hand, orifice, or other substance to find its pleasure.

So my focus on vision in this post was misguided and bound to fail. Mea culpa.

Hey defensive guys: Irigaray is not saying that lady bits are superior to man bits per se. Yet she does suggest that the entire gal package is more self-sufficient, omnipresent, and actively adaptable than your lackluster junk. So there. In my current state, seated in my office on a Saturday night, wearing warm jammy pants [no offense to a Fitbabe fan called Jammy], I tend to agree. Luce, I salute you, but not with the usual thumbs up. Instead, I show my appreciation with a thumb that is not one, a thumb that touches itself, folding in to celebrate multiplicity. I proudly make a gesture long known in the Mediterranean world as la figa.

In your face with my giant girl fig.