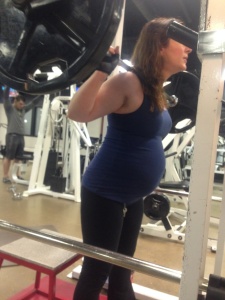 Me at 7.5 months pregnant. I worked out regularly, until two days before my water broke.

It started just before midnight on Saturday January 25, 2014. I was in a state of panic, frantically searching for my cell phone while amniotic fluid poured out of my body, leaving trails across the bedroom carpet. The bed was already soaked when I sat down to text the following message to my partner: “My water just broke. Come home and drive me to the hospital.” After a few minutes, I added: “I am not joking.” “Holy crap,” he responded. “Cashing in my chips and on my way.” “Are you drunk?” I bluntly asked. “No” was his one word reply. He later told me that he was indeed a bit tipsy, enjoying his last night out as a free man.

Lest you think my partner a cad, let me assure you that I was the one who insisted that he play poker that night. “It might be your last chance for a long time,” I said. “Go out and have fun before my scheduled induction on Monday morning. After that, you will be screwed.” “All right,” he reluctantly agreed. “As long as you’re sure.” “Of course I’m sure. I definitely won’t be going into labour tonight, more than a week before my official due date.” Oh what a fool I was to think that my body was predictable and that I was the boss of it.

Things slowed down once we got to the hospital. Even as fluid continued to flow out of my vagina in surprisingly substantial amounts—I had thought that it would all come out in one giant splash, like in the movies—my cervix did absolutely nothing. We waited and waited. I was hooked up to various machines for short periods of time but basically that first night I napped while Lee snoozed in a chair. Oh what, am I boring you? Tough titty. This is my story, though I hesitated to write this post for a long time (eight months to be precise) because I feared that you would not really want to hear it. But I no longer care about you and your needs. This story is all about me, me, me. Me and my leaky, malfunctioning lady parts. 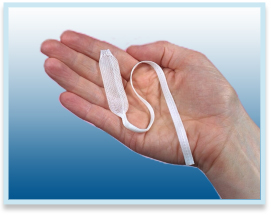 The next morning a doctor that I had not met before came in to insert cervidil tape. She rolled up what looked like a long piece of white ribbon and then jammed it into my cervix. It felt like steel and hurt like hell. “Stop fighting me!” she commanded. Apparently, most women suffer only mild discomfort while having this induction medication put in place. I was in agony, perhaps because my cervix was not the least bit dilated. What can I say? My lady bits really let me down. We waited some more. I was poked, prodded, measured, timed, strapped up and then set free. I was moved from one room to the next, opening and closing the privacy curtains, drinking and disposing of the raspberry juice boxes that I had quickly thrown into a canvas bag the night before. Yet I never went into labour, even as fluid continued to spill onto the floor, bed, and my pjs. It annoyed a mean young nurse who clearly hated her job. All of the other nurses were nice, especially the one with tats who told me that I had a beautiful belly. Back to the mean one: “Ugh that is so disgusting,” she cried when she touched my soiled jammies. Really? I was not sorry. I could not fathom how a professional nurse could be grossed out by bodily fluids. “Sucks to be her,” I thought. I no longer cared who came into contact with my amniotic fluid, or saw my giant bare ass as it poked out the back of my hospital robe. I was dead tired. Another restless and unpleasant night passed, this time without my partner because there was no longer any room for him.

On Monday morning, my actual obstetrician came back on shift and he hooked me up with the good stuff: ocytocin. I was pretty excited about this iv drip method of induction, conflating it with the ocycontin I had learned so much about by watching Breaking Bad. Unfortunately, I never got high. “We will start off with a low dose and closely monitor what is happening,” said my friendly and reassuring doctor. “Then we will increase it periodically, going past 18 if need be. All women go into labour by that time.” Guess what? I am not all women. Even at 22 I was not really in labour. The monitor thingy that was rudely shoved inside my uterus—“I have never had so much trouble inserting an internal fetal monitor before!”—indicated that I was having “moderate” contractions, but I did not rate them above a 5/10 on my physical pain scale. I was now confined to a recumbent position in bed by the iv apparatus as well as by the belts and cords that hooked me up to various surveillance machines. It was quite uncomfortable, yet I could hardly complain when I considered the utter hell and torture that many women endure to get pregnant, remain pregnant, and finally give birth.

Me waiting for surgery.

After more hours ticked away, my doctor suggested that I should have a caesarean section because my cervix had been (ever so slightly) open for a few days, potentially allowing bacteria to enter my uterus and harm the creature known as Foetor. “Fuck,” I said. My greatest fear while pregnant was that I would have this surgery, unnecessarily because of my advanced age (46). My obstetrician had been honest, explaining that many doctors would prejudge my age and be quick to recommend a caesarean, though he would rather avoid that. When I ultimately faced this situation, I did not resist. I no longer had faith in my rock hard cervix, which had barely budged an inch. “All right,” I agreed in a state of utter exhaustion, feeling slightly dejected but mostly blank as I signed the consent forms, heard about the potential risks, was prepped, and had a long needle inserted into my spine. A warm sensation spread throughout my lower body and I began shaking uncontrollably. Apparently, this trembling response occurs in 1/3 of patients. Lying flat in the Jesus Christ pose, I felt myself being prodded and moved this way and that, but I did not feel any pain. Suddenly, the doctor moved quickly to my side and declared: “Here’s your baby!” I was in shock as I turned my head as best I could to see the squirming bundle. WTF? Where did that thing come from? Surely not from my body. I had never given birth; I had never felt the process, and yet this newborn existed. I cried in surprise and relief, snorting like a red neck on Hee Haw. I was not exactly happy to see my baby, I must admit. I was overwhelmed. It was 5:23 pm on Monday January 27.

To this day, my partner and I look at my son as he plays on his mat and ask: “Why is this small being now living in the house with us? Is he here permanently?” Of course we are joking but at the same time we are being somewhat honest. To me there is no embodied link between the kicking creature that was in my belly and my real life crying, eating, and pooping baby. Sebastian is like a mythical creature who appeared out of the ether, choking on the phlegm that was never squeezed out of his body as it passed through the vaginal canal, latching immediately to my breast as nurses held him because I was still sedated. I was disappointed by my birth because I had wanted to feel the most painful thing in the world. I had wanted to push and labour and experience the intensity of childbirth. Is it wrong to admit that wanting to know what pregnancy and birth felt like was the main reason I had continued with my pregnancy? Having a baby was a murky and potentially regrettable result of my quest for embodied knowledge. I was never looking forward to motherhood.

I remain fascinated by the medicalization of birth. That is my partner’s Lebanese man arm cutting the umbilical cord.

Now, eight months later, I cannot imagine my life without the delightful Sebastian. Motherhood is not romantic and it is not the most rewarding thing that I have ever done. But it is pretty fucking great to have a kid.