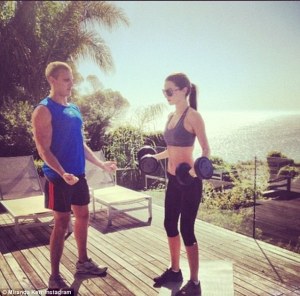 When healthy is conflated with wealthy. Miranda Kerr, supermodel.

Normally I use the term “politics” in the broadest sense, to analyze how everyday interactions are produced within dynamics of power (i.e. visual politics, sexual politics, body politics). Fitness is certainly political in this way, especially now that it is increasingly linked with elite forms of consumption. Just look at how fashion model Miranda Kerr poses for a supposedly candid “healthie” that shows her working out in a luxurious beach home with a personal trainer. IMHO both of them should be doing legs instead of bis, but that is neither here nor there. This image directly links Kerr’s “healthy” lifestyle with privilege. It also rejects and remakes the conventions of a gym selfie, something I am tempted to say more about. I recently revised an article about gym selfies for a scholarly journal, railing against the way in which scholars lump all fitness images together and never look closely at them. This post is, however, more banal. It considers how politicians associate themselves with health and fitness as part of their election campaigns. 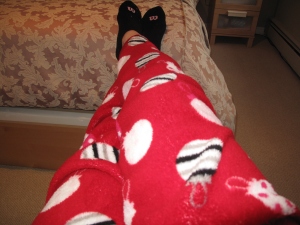 The other night I had some rare time to myself. The baby was asleep and my partner was out winning another poker tournament. Too tired to write, I switched on the TV while lying in bed, wearing festive pants. I accidentally came across a documentary called God Save Justin Trudeau, a personage that any Canadian will instantly recognize, perhaps with disdain, but maybe with hope for the future of the country, or even a hint of lust. To each his own, I suppose. The rather long and boring film featured an event that occurred in 2012, when the young Liberal politician Justin Trudeau challenged the conservative senator Patrick Brazeau to a boxing match. Though the contest was ostensibly meant to raise money for charity, it was in fact a savvy and strategic part of Trudeau’s political efforts to become leader of the Liberal party. He needed to overcome his wimpy, pretty-boy reputation, and demonstrate his possession of man-balls in a ritual display of man-punching. Otherwise he could never hope to succeed on the rough and tumble stage of Canadian politics.

The title of the documentary is as funny as the previous sentence, at least from a Canadian point of view. It plays on the phrase “God Save the Queen.” People my age and older will remember singing praises to her British majesty in the school choir. Those were the days. Alluding to our longstanding nostalgia for royalty, the film’s title suggests that Justin will rule by divine right because he is the son of Pierre Elliott Trudeau, Prime Minister of Canada from 1968-84. The first Trudeau was a media darling—he charmed ladies, gave the finger to anti-French protesters, and slid down railings—who reshaped the country by repatriating the constitution, instituting the Charter of Rights and Freedoms http://laws-lois.justice.gc.ca/eng/const/page-15.html (designed to take the state out of the bedroom), and promoting official bilingualism, among many other reforms. He also alienated the oil rich West where I now live, and let me tell you that Albertans have long memories and don’t like to share. They hate Trudeau’s guts; same with his spawn. The title God Save Justin Trudeau also suggests that Justin is in fact a Queen, with delicate ladylike qualities that could spell his political doom. [Aside for my dear American readers: I won’t bother explaining Canada’s constitutional monarchy, but I will say that Canadian politicians can swear, choke protesters, get drunk, smoke pot, and skinny dip without losing any credibility. As long as they have man-balls, it is all in good fun].

Justin has less armpit hair than me.

Back to the career saving boxing match: the film mostly features the lead-up to it, showing Justin posing for pictures, fluffing his hair, kissing young women (some of whom are his wife), and generally looking like a dumb ass. I was surprised by how unintelligent he seemed, for I am a fan of his policies. Vote pro-choice or get out of the Liberal caucus, you say? Fuck yeah. Legalize marijuana? Of course. Hate on Prime Minister Harper and his misogynist thugs? Sign me up. At this point I should admit that I am a member of the New Democratic Party (NDP) and would never vote Liberal, unless it was to stop the demonic Conservative force otherwise known as “The Harper Government.” [Another aside for Americans: The NDP is left, the Liberals somewhat centrist, and the Conservatives are the right-wing party, but all are more left than any major American party. For example, even the currently reigning Conservatives can’t openly attempt to restrict abortion rights without getting their asses kicked]. Still, the filmmakers admitted to having great admiration for Justin after following him around for almost two years as he trained for the boxing match. He consistently worked hard, keeping his long term goals in mind. In this case, he acted like an American politician by realizing that he needed to display a fit and manly body to ensure his political future. Though schlumpy Canadian Prime Ministers are the norm—consider Harper in his sweater vest—American Presidents have embraced fitness publicly, at least since the dawn of mass media. Obama plays basketball, and Clinton jogged (to McDonald’s, but still…). In contrast, Pierre Elliott Trudeau was known to pirouette behind the Queen, and canoe while impersonating a jaunty coureur du bois. Such was his brand of masculinity.

Who wants a piece of this?

Justin was not favoured to win the match and I think you can see why below. His opponent was a former military man with a black belt in karate and visible musculature. Patrick Brazeau seemed stronger, meaner, beefier and almost everyone expected him to smash Justin’s aquiline nose in the first round. That’s not what happened. Feel free to watch the fight on youtube (link below). Basically the fight began with both men swinging wildly and looking pretty evenly matched. Then Brazeau got tired and took some hard hits; he was technically TKO’d in the third  round. https://www.youtube.com/watch?v=XuSpZ3_5pTc.

My interpretation of the boxing match is that it reinforced hierarchies of class and race. Trudeau triumphed as the middle-class white man with his fancy education and proper white body, putting the rough-edged Brazeau in his place. Trudeau was more restrained and refused to trash talk as much as Brazeau, while the Senator played his assigned role as thuggish bad boy to the hilt. For these reasons I wanted to cheer for Brazeau; he is an ambitious Aboriginal man who made it into politics despite his background, not because of it like Trudeau.

All the same, Brazeau made many mistakes. First of all, he wore a speedo to the weigh ins. Why? Secondly he did not take his opponent seriously enough and seems not to have trained as hard. His cardio fitness was not up to snuff. And thirdly, there are the criminal charges that eventually led to Brazeau’s removal from the Senate after the fight was over. The former Senator allegedly committed fraud, assault, sexual assault and was caught driving under the influence more than once. Brazeau’s star crashed and burned after the boxing match whereas Trudeau’s rose. Brazeau is clearly not a very sympathetic character, but I still regret that narratives of white superiority and elitism were invoked by Trudeau’s win. I guess Justin has something in common with Miranda Kerr after all. And the Queen.