I am reading about the history of beauty pageants because they set the stage for the bodybuilding and figure contests that are held today. A book called “There She Is, Miss America” (2004) provided me with a fascinating piece of information: the North American and European tradition of female pageants was innovated by suffragists lobbying for the vote in the 1910s. These women made a spectacle of suffrage, demanding women’s rights by staging costumed events in public spaces. One performance in Washington in 1913 featured a female activist dressed as Columbia, summoning the allegories of Charity, Liberty, Peace, and Hope. I will try to incude an archival photograph with this post because Columbia is one hot and happening babe. Named Hedwig Reicher (she was clearly destined to kick some patriarchal butt), she is dressed like Athena the warrior goddess, wearing a form fitting cuirass, impressive helmet, and brandishing a halberd. She stands strong, daring to draw attention to herself, and insisting that women’s voices be recognized. All I can say is: Respect. 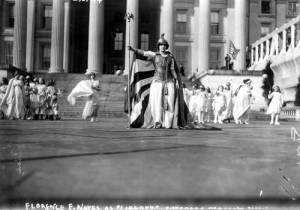 So it is really no surprise that the first large-scale national beauty contest, the Miss America competition, was launched just a little later, in 1921. Instead of armed women making lots of noise and getting arrested, however, the format of this event invited mostly teenaged girls to wear bathing suits and say nothing (the talent and question portions were added later). These women were to be wholesome, white (being a member of the ‘white race’ was official policy), demure, ‘natural’–make-up was forbidden–and determined to become wives and mothers, working within rather than outside of the home. Historians of this longstanding beauty pageant argue quite convincingly that it was created to produce an image of the ideal woman in contrast to the new or liberated woman, as a direct affront to the demands of politicized suffragists. The authors then trace the rise and fall of the contest, linking its popularity with many different issues but also with recurrent backlashes against feminism. Like Susan Faludi has claimed, whenever women seem to take a step forward, they are knocked back by government policies, spending cuts, anti-choice rhetoric, and ranting fat men on the radio. And perhaps also by contests which reward women for long tresses and glowing skin, not opinions that might upset the apple cart. Oh and I should note that these competitions attempt to pit women against each other, instead of having them work together to better their own lives and those of their daughters. I nevertheless doubt that beauty competitors ever tried to scratch each other’s eyes out, hide the mascara wand, or reveal the stuffed bra top to gain the upper hand.

Figure competitions, which involve women lining up on stage in sequined bathing suits, are rather new. The first National Physique Committee (NCP) Figure Nationals were held in 2001, and the International Federation of Bodybuilders (IFBB) Figure International in 2003 was the first professional figure contest. Were they created in response to recent gains made by women? Well, maybe recent gains in terms of the muscle packed on by female heavyweight bodybuilders who proved that women’s bodies could know no bounds; they were big and strong and beautiful and scary as all get-out to certain knobby-kneed boys, as well as to their insecure sisters. Figure competitions are regularly described as being other than heavyweight bodybuilding. Figure girls are not meant to be ripped or shredded. They should retain some body fat and look ‘feminine’ (this term is used as if its meaning is obvious) and sexy and healthy and confident onstage. They simply pose in a static manner and do not speak. Figure girls offer an alternative to becoming massive and ‘manly’ (Note: in protest to the way in which this term is a problem when applied to women, I have adopted PJ Harvey’s Man-size as my theme song. If I was a bodybuilder I would use it for my posing routine), pitting them against not only each other but also against those women who defy and demolish the category of ‘femininity.’ Please be assured that I intend this remark about demolishing femininity to be full of praise and admiration; it is by no means a criticism.

Yet I cannot argue that figure contests are simply retrograde activities that conflict with the expansion of women’s rights and women’s biceps. After all, figure girls are not the curvaceous and soft types who regularly won the Miss America crowns during the first fifty years of its existence. Figure girls look amazingly like Hedwig who had far more than an angry inch (and so do figure girls who train to the fullest extent). Figure girls are still more muscular than the ‘average’ woman and look like warriors on stage, except that their armour is not attached to the body as a costume, it is developed from within as another kind of costume. Figure girls also make a spectacle in public places–like at the after party of the Olympia weekend? which might also involve noise and arrests?–demanding space at the gym and in the world of fitness. They defy softness and embrace the hard and the lean–that sounds kind of dirty but also kind of great–deliberately at odds with social expectations.

My trainer often gives me extra time at the gym–love her!–claiming that she likes working with me because I want to get bigger, whereas most of her female clients want to get smaller. These jiggly women are primarily concerned with fat loss. Now fat is a feminist issue as we all know. But I can’t help but wonder what to do, because while it is conformist to try to meet the rigid beauty standards of today, how on earth is it a political, feminist act to be fat or obese, eat unhealthy food, and avoid exercise? In response to this quandry, I can only strap on my ipod (what were you expecting me to strap on?) and sing along in an out of tune fashion:

I’m heading on. Handsome. Got my leather boots on.’

Oh yeah, and I do have my leather boots on as I sit here writing this, balancing on the giant ball that is supposed to be good for my back. Strutting around in those boots in public is the only good thing about the impending cold weather.