During our second day in Las Vegas, all three of us headed over to the Convention Centre, lining up to enter the fitness expo. I was bored so I took a photo of the entrance. Now you can see what I saw for about 10 minutes.

Once inside we were handed huge plastic bags for collecting free samples of protein powders and bars from booths promoting nutrition, weight loss, and muscle gain. There were plenty of activities too, with power lifting performances—how I love those strong women whose faces puff up like tomatoes when they squat with five times their body weight on their backs—chin up competitions, costumed super heroes, and even The Incredible Hulk himself. I can’t remember what he was selling, but I saw him later with his much younger short-skirted wife, chowing down at the seafood buffet at the Orleans Casino. Insider’s report: Lou Ferrigno likes crab legs and is not afraid to attack the dessert cart. 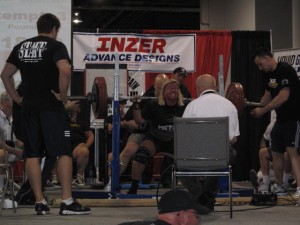 Back to the expo: I was especially eager to view the prejudging of the figure and Ms. Olympia events, having paid for the cheap, standing room only tickets. When we arrived there was a huge mostly male crowd already there. How great that they support female bodybuilding I enthused. Then I saw what they were looking at—bouncy thin women lined up on stage for the first ever Ms. Bikini Olympia competition. Well duh. This marketable contest was aimed directly at heterosexual men, especially those who enjoy conventional porn. The scene was actually quite bizarre, with young women literally skipping across the stage like little girls, then posing with their large, round, fake tits pushed out before turning around to arch their backs while opening their asses. The ‘fuck-me’ nature of this pose could not have been more obvious. But wait, oh yes it could. For each prone woman then proceeded to look over her shoulder and award spectators with an accommodating smile or saucy wink. The crowd thinned out for the figure and bodybuilding prejudging that followed. Like the bikini girls, the figure contestants wore small bathing suits and posed for the audience. They nevertheless walked more like demure beauty queens at a Miss America pageant, and struck the obligatory quarter-turn postures in a wooden fashion meant to display their well developed musculature rather than their sexual availability. I don’t want to exaggerate these differences because figure girls try to be sexy and they certainly conform to dominant standards, with many of them spending money on breast implants. They also, however, reveal mature muscle development, are usually older, and are more restrained in their bodily movements than the bikini models. In an even greater contrast, the female bodybuilders walked onto the stage in a no nonsense way to strike the required poses (front double bicep, side tricep etc.), accentuating the dimensions, articulation, and proportion of their musculature. Though they all smiled and sported long manicured nails, carefully styled hair, boob jobs, and make-up—many authors have discussed the compensatory nature of these feminine accessories so I won’t bother—the bodybuilders did not assume the postures of accessible female sexuality; for the most part, they defied them. I think that is why women such as me far prefer female bodybuilding to the other contests, including figure. I also admire what these gigantic and fabulous women have accomplished, having an inkling of the hard work and dedication that led up to their moments on stage.

Those bikini girls don’t get no respect, at least not from anyone in the fitness industry that I met during the Olympia weekend in Las Vegas. Their derision was based on a number of assertions and I will summarize them here in no particular order: the bodies of bikini models are simply dieted and tanned; they are not exceptional. Bikini girls are not seriously committed to muscular development and really have no talent. Their presence cheapens the other Olympia events, and was obviously designed to expand the market and please a particular male audience. Yet including bikini has negative effects, deliberately directing further attention away from the female bodybuilders. While I agree with most of these claims, I think that there is something more, something unstated, that drives insiders to bash bikini girls. Ms. Bikini Olympia potentially reveals the erotic and sexualized aspects of the other female competitions, especially figure and fitness, which participants might want to deny or at least downplay. 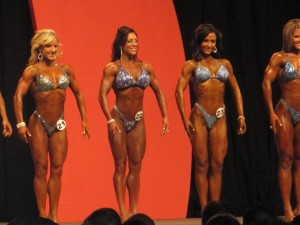 What is bodybuilding anyway? It is not really a sport, not a game, not a display of technique or skill. It is a form of bodily display. Nevertheless, years of serious training and athleticism are required to build substantial and mature muscle. This work is not visible, at least not when bodybuilders are photographed posing or are on stage. It is sometimes highlighted in the Pumping Iron films or photo spreads that are staged at the gym. Although bodybuilding is like an entertainment and certainly has its roots in beauty and other kinds of pageants, it is not really about spectacle, at least not in the way that MMA fights or even the Ms. Fitness Olympia are spectacular. The fitness women, for example, wear costumes and use props, while they leap, flip, and do pushups across the stage to pounding music. Bodybuilders do none of these things. Nor is bodybuilding overtly erotic, at least not for a mainstream audience. In the end, bodybuilding is uncertain, shifting between various forms of sport, display, athleticism, and sexual appeal.  In the past some people have argued that bodybuilding is a subculture, though many aspects of it have since entered dominant cultural practice. Leslie Heywood, author of Bodymakers: A Cultural Anatomy of Women’s  Body Building (1998), might be closest to the truth when she concludes that bodybuilding is, first and foremost, a lifestyle. 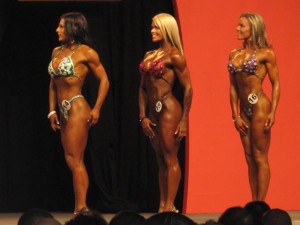 3 thoughts on “What Happened in Vegas #2: Bashing the Bikini”