I consider Sigmund Freud a genius and I don’t use that term lightly. In fact, I often historicize and undermine the concept of genius in my art history courses, especially when I am talking about such mythological creatures as Leonardo da Vinci and Michelangelo. But I invoke it in relation to Freud because his ideas were so novel, earth shattering, and influential. They changed forever the path of thought about the body, sexuality, and identity in the west. Who cares whether or not his theories are completely accurate or verifiable? That is not the point, and anyone who thinks that way about Freud is:  1) unimaginative; 2) mudane; 3) unlikely to have read any Freud; and 4) no longer my friend. Once you engage with Freud’s own writing—not some uninformed summary by know-nothing psychologists—you will begin to worship him as I do.

During my first year of graduate school I read Freud every single day. I encountered his shifting discussions of hysteria, dreams, the wolf man, sadism, secondary masochism, fort/da, and the return of the repressed, always with a worn copy of Laplanche and Pontalis by my side. I was traumatized, enlightened, challenged. I ruminated, contemplated, micturated. My life was changed and his ideas still lurk somewhere within me, informing my everyday life. Scared, aren’t you?

I have been thinking about Freud’s theories of the death drive in relation to bodybuilding. Yet the undoubted human urge toward aggression and self-destruction doesn’t fit with my experiences at the gym. Sure some crazed guys lift way heavier than they should, bending their backs and cracking their elbows, and they no doubt want to kill their fathers. But not me. I prefer to consider my own interaction with bodybuilding in terms of what I call the drive toward distinction, an idea that rests more on Pierre Bourdieu than Sigmund Freud. Oh God, yet another blathering French man? Yes indeed, though I must point out that Freud was Austrian, spending his last days in England after fleeing the Nazis. I highly recommend the Freud Museum in London, which features his couch surrounded by ancient art works. The best part about visiting this museum is watching the old films of Sigmund frolicking with his dogs. 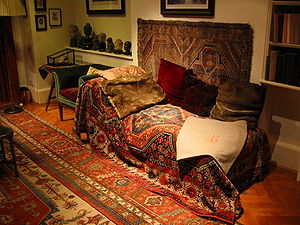 In Distinction: A Social Critique of the Judgement of Taste, Bourdieu draws on empirical evidence gathered during the 1960s, mostly in France, to argue that a person’s likes and dislikes are largely determined by social origin; they are learned from parents and surroundings, not in-born personality traits. Bourdieu interrogates everyday aesthetics, noting that preferences for specific foods, furnishings, and sports are not just a matter of personal ‘choice,’ but are predetermined, meant to distance ‘us’ from those of other classes, especially lower ones. So the next time you are cooking breakfast and are tempted to think ‘I just love bacon because it tastes so good, ‘ think again. What kind of bacon is in your pan and why are you eating it instead of oatmeal or bananas? Read that bacon like a fortune teller reads tea leaves. Admittedly, this pork product scrutiny would not work well at my house, for I purchased turkey bacon against the will of my partner even though he is the only one who will consume it; 50% less fat is still 50% too much fat for me.

That’s right, I can bring home the bacon, fry it up in a pan, and then not eat any of it. I can do lots of things that other people cannot do. I am not like them; I am better. My life has been shaped by the impulse to achieve the difficult, not the easy. When I first heard that two-thirds of those who began a PhD never completed it, I was filled with joy. But now I am pursuing something even more distinctive. Just yesterday, when G-Smash was here for lady-date night—we stripped down to bras and panties, baked brownies together, and then I bleached her roots—she told me that 97% of people who decide to enter a bodybuilding competition never actually make it to the stage. My heart sang. ‘Holy fuck,’ I literally shouted, ‘now I want to do it even more.’ I had never before been so certain that I would hit the figure stage and look fucking fantastic on it. As I regularly say to my partner ‘I stand out in my comparison group.’ Of  course that group consists of middle-aged lady professors. Not exactly cougar town, but still.

And here I have to admit—with some reluctance as such discussions are socially forbidden—one of the many reasons that I have decided not to have any children. It’s because most people have them. Not that parenting is easy, not at all. I think it is ridiculously difficult, one of the hardest things a person can do. My point is that it is possible; most women give birth. Again, let me be clear: I think that women’s reproductive capacities are amazing and I have devoted much of my career to learning about the history of pregnancy and birth. But it is a physical experience, however diverse, that a very large proportion of the population accomplishes. Doing it therefore interests me very little; well, not at all.

Speaking of women’s reproductive parts, I will end by raising an issue that G-Smash noted after I gave her an avocado facial and painted her toe nails royal blue: the increasing popularity of the word vagina. Vagina, vagina, vagina. Everyone says it all the time these days. DYT likes to call people ‘vagina face,’ though not during spin class. She is probably thinking it, however, about that jackass guy who does not follow her directions and watches himself in the mirror while bouncing up and down at a steady pace. At least I obey her commands to do sprints and stalls while looking endlessly at my glowing reflection. Back to my point: the v-word has not always been in fashion. It was considered a medical or vulgar term in the recent past. Proof positive: I have not heard it uttered on Mad Men. So I have a challenge for you, whoever you may be: count how many times you hear someone say the word vagina during the next week or so and then get back to me. Just think of yourselves as mini-sociological researchers, channeling Bourdieu, but without the French angst and cheese breath.