Every once in a while the FFG blog gets a boost in readers, and a sudden spike appears on my informative wordpress dashboard. It happened this week because another article was published about my incredibly thrilling research project. Called ‘Muscling Into Theory,’ it was in the Chronicle of Higher Education, a weekly American online news and job information site for academics. A number of my American conference friends e-mailed me congratulatory messages, so I guess it was kind of a big deal:

While I wrote the article, it was edited and re-titled, and I did not choose the photo, though in the end I am happy with the one included. I look accurately dorky and uncomfortable in my bikini plus ultra-tan. I was especially pleased to hear from a number of people previously unknown to me, all fit academics using their valuable time to send me a shout out. Equally rewarding was the $350 cheque that I found in the mailbox the next day. Academic publishing usually pays nothing except elusive cultural capital, which is hopefully cashed in later as professorial salary. Certain presses will ask its authors to choose between payment in books or a smaller lump sum of money. I always take the money.

One notable message came from an American academic who had recently won a bodybuilding competition. I immediately asked him to guest blog, inviting him to become a celebrity poser on the FFG stage. Expecting him to be overwhelmed with writing deadlines, grading, and intensive training, I was sure that he would decline. Once I learned about his incredibly successful publishing career, however, I was not surprised that he instantly sent a draft text, generously and efficiently contributing to FFG world. As I read about his road to becoming a ripped tenured professor, I thought ‘Wow this guy is an ambitious maniac, just like me.’ We both completed a PhD and attained a tenure track job before reaching the age of 30, got early tenure, and then continued to ‘produce’—academic terminology—while excelling in other domains. ‘We are the same person!’ I pompously exclaimed. Well, except that he is younger, an African American, and has a penis. But other than that, exactly the same. Oh, and he also won his national-qualifier competition, instead of being bralessly ranked in the middle of the entry-level pack like me. Still. I want to stress my respect for this relative stranger. Just as those who have never competed do not really know what it feels like, physically and mentally, to be onstage as a bodybuilder or figure girl, so too do very few understand what it takes to be a successful tenured professor these days. I am not talking about that asshole professor played by Robert Redford in that crappy movie I regret having watched on an airplane; nor do I mean those fucking old guys who would never be hired today, and should retire but never will. They are determined to die in their dusty offices while staining their bad-breath brown teeth with one last coffee. Will I regret learning how to adminster CPR and use a defibrillator? Fingers crossed that I won’t be on campus that day. Whenever a fresh faced young student comes by my office to assert: ‘I want to be a professor, like you!’ I can’t help but grimace and try to talk him or her out of it, explaining what is actually involved, including 10-15 years of university education, a low chance for success, and little choice about where to live. If you actually want something called ‘life-work balance’ then steer clear of this business. But enough of my blathering. Today you can look forward to a nice breath of fresh air from Guest Poser. Take it away GP. 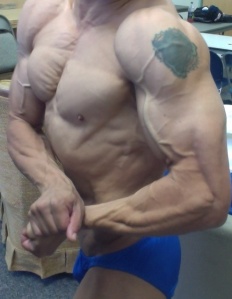 I have been bodybuilding for almost four years.  I have competed in both the National Physique Committee (NPC) and National Amateur Bodybuilders Association (NABBA).  I am currently a national level bodybuilder in the NABBA and recently won the NABBA Great Lakes Open Lightweight class.  In May, I won the NPC Vermont novice lightweight and open bantamweight classes.  Perhaps, more importantly, I am a tenured history professor at a university in New England.  My fields are the British Atlantic world, slavery, and African American history. I should also mention in the interest of full disclosure that I am African American.  How many African American historians are national level bodybuilders?  Not many.  Bodybuilding is a lifestyle, but also a very strange subculture full of both extremely interesting and intelligent people, but also the most ignorant and stupid knuckle draggers you could imagine.  It is extraordinarily difficult to prepare for a bodybuilding contest and continue to live the life of an academic.

I was always interested in building muscle from a young age and though I was athletic as a teenager I ended up becoming a stereotypical cigarette smoking, coffee chugging, fast food eating graduate student.  I was what we might call a hardcore academic.  I did nothing but academics 24/7/365.  Not surprisingly, I finished my doctorate at age 28, got a tenure track job at 29, and earned tenure at the age of 33 because I had enough publications to go up two years early.  Strangely at the moment of my greatest academic success, I felt incredibly empty and unhealthy.  I still smoked cigarettes, ate crappy food, and felt disgusted with myself physically.  I decided I needed a change.  So, in the cliché of all clichés, I met a woman who was a runner and I slowly quit smoking and started running.  We soon broke up, but I continued to exercise.  Soon, I figured out that I liked deadlifts and squats more than running 15 miles.  So, I focused more on bodybuilding and got on a better diet and figured out what I needed to take in in terms of calories, protein, carbs, and fats.  I thought I was ready to finally compete in a contest in July 2010.

I spent the spring and summer of 2010 preparing for my first contest, which was held in New York.  I had a great IFBB pro as a trainer and I put together a great diet and supplement plan.  I had no idea the mental and physical strain that contest dieting could put on you.  I made it all the way through to the contest day and then literally at the last minute I quit.  I looked fine, but my mind was not there.  I was still smoking and dealing with other issues—family, relationships, etc—that I think we academics can tend to ignore (well, maybe it is just me, I don’t know).  I felt so frustrated, but I was not mentally prepared.  So, my first contest prep ended in utter failure.  I suppose my bodybuilding career could have ended before it really even started.

In January 2011, I made some major changes, I finally quit smoking (I should mention that I had quit for about 11 months from Feb 2009 to January 2010) and decided I would put my focus on my bodybuilding contest, which I could do because I was on sabbatical and finishing my second monograph.  So, while writing can be time consuming, it is much easier to set your own schedule when you are not teaching.  So, I slowly prepared myself for a May 2011 bodybuilding show.  I dieted and worked out and took various supplements and changed up my workouts, supplements, and diet.  Finally, in May 2011, I stepped on stage and won a competitive novice lightweight class.  I think the thing that shocked me the most about the whole bodybuilding experience was the shaving of the entire body before the show and then the spray tanning experience.  As an African American who basically thinks, writes, teaches, and researches racial issues the idea of getting spray tanned can only be described as weird; and to watch very white people get spray tanned was also a bit shocking.  It is a little like watching a bodybuilding version of Black Like Me.  There has to be a book about what spray tanning and bodybuilding say about race in our allegedly post-racial society.  Maybe, I’ll write one, but more likely I will stick to writing about people of African descent in the British Empire.

On November 19, I had the honor of competing in Great Lakes Open and the contest prep went pretty well.  However, it was extraordinarily challenging because I am teaching two courses on African American history and have 80 students.  Preparing to lecture everyday, holding office hours, and giving my best in the classroom everyday on top of prepping for a bodybuilding show, which was a national qualifier took a toll on me.  But, in the end it was incredibly worth it.  I am looking forward to finishing my second monograph and competing in two shows next year including the NABBA nationals.

So, what was a typical day like during my contest prep while teaching?  See below.

Below, I have listed my current daily diet, which is designed to put on size.  I am a very small guy and I need to grow a bit before my next competitions.