‘Holy shit!’ we shout in unison, as a truck suddenly barrels towards us on the sharply curving 1.5-lane highway. Me, Glam Pro, and her partner are somewhere in Tuscany—who the fuck knows where, really—in a Fiat 500. Luckily this zippy car is equipped with vomit bags which, like air bags, pop out of the doors during hairpin turns (in other words, every five seconds or so). After collectively hurling we find—or at least think we have found—the turn-off to Colle. ‘Ouch!’ I shout when a branch enters the open window and scratches my cheek, just missing my eye. ‘This is a fucking goat path,’ declares the partner of Glam Pro, a fabulous cook who has already made me, among other things, a delicious meal of scampi and shrimp, before plying me nightly with grappa. At this moment, however, I am having a childhood flashback to the Great Canadian Mine Buster. You know, that bumpy, loud, roller coaster at Canada’s Wonderland, just outside of Toronto? ‘Goat path’ is actually a compliment, for the twisting up-and-down trail barely accommodates our small vehicle, much less the tour bus now rushing at the dashboard. The proficient Glam Pro immediately throws it into reverse and backs up relatively blind to a distant pull off, allowing the bus to pass. ‘That mother fucker didn’t even wave,’ fumes the other member of what I call the Glam Pro Power Couple, something of a stickler for rules. ‘Jack ass!’ I scream in participation, for I am otherwise a useless object in the backseat, sitting alongside clanking bottles of wine. Finally seeing signs of habitation, we clambour out of the Fiat, not caring if this particular vineyard is the one we were hoping to visit. Glam Pro needs a drink—or five—pronto-like. Much to our joy, we see a small poster indicating that we are indeed at the Donatella Cinelli Colombini estate, that of a female winemaker with an all-female staff. Once inside, we sample the wares and learn that signage is a point of dispute in the region. Government officials decided to remove all directions at the crossroads, lest people slow down to read them, encouraging accidents. Now drivers simply stop dead in their tracks on the highway to engage in lengthy debates about which of the six or so possible routes to take, eventually choosing the wrong one and then pulling a sudden u-turn. Much safer. [Aside: we enjoyed this Italian auto-experience some eight times]. Grazie. 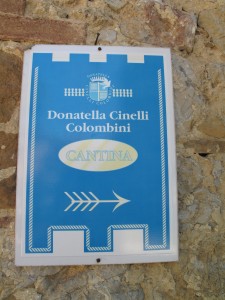 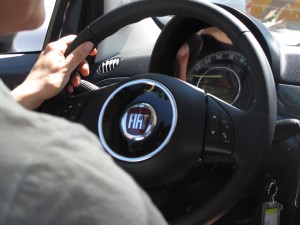 Death is one of the reasons I came to Italy, but I would prefer to approach it less directly. Just this morning, for instance, I climbed to the top of Cortona to see the mummified remains of Santa Margherita, resting in a glass coffin—kind of like Snow White—in front of the altar. I am rather fond of this thirteenth-century saint, for her life story is something of a fairy tale. After her mother died, the eight-year-old Margherita was mistreated by an evil step mother. At age 16, the young peasant girl escaped her unhappy home, easily seduced by a rich nobleman who promised to marry her. After moving in with the apparent scoundrel, Margherita had his baby and waited for the wedding day, which never came. When Margherita’s deceptive lover died under mysterious circumstances—she found his body under some branches on the road—the distraught mother renounced her worldly life, devoted herself to God, and performed a few miracles. When she died at age 50, Margherita’s sweet smelling corpse did not decay, a sure indication of divinity. I took a snap of her intact wrinkly face for your viewing pleasure.

Here is her coffin and her convent.

My death drive is not strong, no matter what Freud says. Those bikers who ride on Tuscan highways, however, should have had the last rites before pulling on their tight scrotum-destroying pants and tossing aside their protective helmets. Oh how we cursed them. I have nevertheless also done a few dangerous things since arriving, flagrantly breaking the law in order to pursue fitness. While conducting a boot camp in Cortona’s public park, for instance, I brazenly invited everyone to perform pushups on the grass instead of the gravel. While we were trampling the precious herbage, the park police pulled up in a white truck. Instead of explaining the rule or asking us to exit the small grassy area, the two men simply adopted aghast expressions while lifting both hands questioningly in the air. They retained this posture until we removed ourselves from the petite parkland. You can imagine my daring, then, when I returned the next morning to fill empty water bottles with parkland gravel, creating makeshift dumbells. As I was hurridely filling them—it took some time as you can imagine—I glanced around fearfully. The enforcement truck was approaching! Tossing my now-heavy bottles into a sack, I sprinted to the Vicolo Panzani, a medieval short cut to my home. ‘You’ll never catch me coppers!’ I exclaimed, unsatisfyingly in English. Stay tuned for more of my exciting Italian adventures, unless I am thrown in recreational misuse jail. I’ve heard that it is pretty crowded.