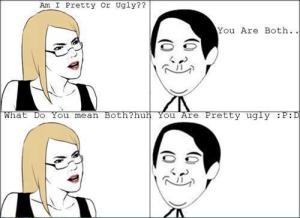 Type “Am I Pretty or Ugly?” into any search engine and you will find hundreds of thousands of videos made by pre-teen girls. These youngsters—some of them seem about eight years old—shyly pose before a camera before hesitantly admitting that they have a question to ask. They simply do not know if they are attractive or not. Some kids at school say that they are cute, but others judge them more harshly. What is the truth of the matter? All of the girls in the videos I saw were wearing make-up and had their hair done. None of them was hideous, but all were vulnerable, asking for help in a way that made me want to cry, despairing at a world that could be so cruel to children.

I then tried to consider the videos in a more positive light. After all, the girls were bravely exposing both the ambiguity of beauty standards and the social nature of identity formation. Although people are often quick to state their preferences, it is not clear precisely what constitutes beauty, a concept that shifts historically and culturally. Even as dominant popular culture in the west features an amazingly standardized image of female attractiveness—as slim, young, smiling, and ultimately attainable—to a certain degree it remains “in the eye of the beholder.” The questioning young ladies in “Am I Pretty or Ugly?” videos recognize the importance of this act of looking and deliberately expose themselves to it, revealing that they are in fact already subject to the judgmental gaze of others on an everyday basis. Not yet sure of who they are, the video makers convey a message that is rather profound: identity is not a natural kernel of truth existing within individuals and waiting to be discovered. Instead, it is produced within social dynamics that are unavoidably laden with power dynamics. In other words, we become ourselves in large part according to what others project back during our interactions with them. To a certain degree, then, the “Am I Pretty or Ugly?” videos are radical, breaking with commonsense notions of the neo-liberal individual who simply finds herself or else chooses to be strong and happy. In both cases she is personally responsible for whatever kind of life she ends up leading.

Ideally, then, these videos would encourage critical thinking about contemporary culture, but that is not the standard reaction to them. The majority of people (hundreds of thousands of them) who eagerly respond to the question posed enjoy informing the youngsters that they are ugly as sin, stupid, and useless. When UK artist Louise Orwin posted her own youtube video, pretending to be a fifteen-year-old girl riddled with uncertainty, she received thousands of comments calling her a bitch and a stupid slut (http://www.wired.co.uk/news/archive/2013-10/11/pretty-ugly). Her research revealed that the majority of respondents were adult men. Why did these grown men react so passionately and hatefully toward what was in effect a little girl asking for approval? One of Orwin’s answers is that these men are fueled by a virulent anti-feminism, a point that is especially convincing when she traces the actual identity of a “hater.” This conclusion accords with my own experiences with adult men who seek out situations in which they can berate much younger women. I saw this dynamic play out time and time again at abortion clinics—I volunteered as a clinic escort in the United States and Canada from 1992 to 2007—where older conservative men would eagerly attack both the young women coming into the clinics with their boyfriends and families, as well as the reproductive rights activists who were protecting them. These anti-choice men would become aroused by the encounters, in a sickly sexual fashion. They were excited and strangely enabled when acting aggressively toward apparently vulnerable women who were “sluts” needing to be taught a lesson. At abortion clinics and protests, the bearded and leering men acted in the name of “God,” whereas in youtube comments the men can be more anonymous, brutally attacking young women for the “public good.” 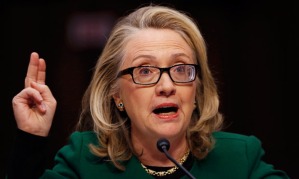 Hateful people repeatedly try and fail to reduce Hillary Clinton to her appearance.

The fact is that even as women are (supposedly) encouraged to be financially and emotionally independent, to make “good choices” in their lives, dependency is the preferred feminine condition. Strong, assertive women are the most loathed of all in popular and political culture. Hillary Clinton anyone? In contrast, the young girls in “Am I Pretty or Ugly?” videos attract irrational desire and are irresistible because they seem weak and vulnerable. As pre-teens and teenagers they are uneducated, perhaps with their own room but living in someone else’s house, hoping to be treated well rather than be subject to random abuse. Many conservative men (and no doubt some women) want them to stay that way, to “know their place” as adult women who will continue to live in the same precarious manner, hoping to find a caring man who is conventionally drawn to their debased position in order to sustain rather than exploit it. The dominant culture encourages these women to move immediately from one relationship to another, from one state of dependency to another, with fingers crossed. Sure, sometimes this strategy will mean that women have to endure abuse, but one day they will find a “prince” to take care of them and heal their psychological wounds. And let’s be clear about this: No matter what happens, in the end it is their own damned fault.

As I perused the popular literature on the subject of ugly versus pretty, I also found web sites on which women posted images of their vulvas, asking for opinions about the appearance of their vaginas in particular. Feel free to look them up. Then you can do what I did by squatting over a mirror in order to compare your own bits with those online. This should be especially enjoyable for male readers. In any case, I decided that my lady parts were both visually stunning and fabulous, though I must admit that my adulation of them is based more on what they have done for me rather than on how they appear. My partner could not give a “fig” [get it?] about what my lady bits look like, but some men seem to care. Check out a fine documentary video about the increasing practice of labiaplasty, a surgical intervention usually meant to make the labia look smaller (http://vimeo.com/groups/43127/videos/4704237). Apparently all vulvas should be tucked away, neat and tidy. Women who have had this cosmetic procedure proclaim that they merely want to look and feel “normal,” though there is no normative vagina; the shape and size of vulvas can and do vary widely. 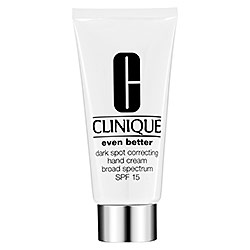 I will buy many beauty products in my day, but not this one.

Conformity is alluring and will be rewarded with praise. Its pursuit might seem difficult to resist. An article by A. Chris Downs and Sheila Harrison, called “‘Embarrassing Age Spots or Just Plain Ugly?’: Physical Attractiveness Stereotyping as an Instrument of Sexism on American Television Commercials,” suggests as much. Their study, published in a scholarly journal called Sex Roles, noted that television viewers were confronted with over 5,260 attractiveness images every year, a number that has no doubt increased since 1985, when the quantitative account was first published. According to such research, we should not be surprised that many girls and women suffer from low self-esteem, eating disorders, and a perceived need for cosmetic surgery. We should instead be surprised by those who do not have these problems. How on earth do girls ever manage to be strong, self-aware, and self-accepting people? That is the real puzzle deserving of careful analysis. Another important issue: why are some women subject to certain attractiveness demands (they want to have porno tits), more than others (they do not feel as much pressure to be conventionally thin)? I am a case in point, for I admit with some shame that I am concerned about the contours of my ageing face, but could not give a rat’s ass about the “liver spots” that increasingly uglify my hands. Why am I willing to buy expensive facial creams for my visage but not my spotty oven mitts? How does this partial resistance and refusal occur? I honestly have no idea.

In all seriousness: scholarly research should focus on those girls and women who defy conventions to determine how that happened. I personally know many confident and fulfilled women who in no way adhere to beauty standards, and I’m sure that you do too. Most of my gleeful friends are professors, but that occupation is clearly not essential to success. I have a few ideas about how oppressive beauty standards are thwarted, and welcome your comments on this topic. For instance, I recently spoke with two women who are employed by government agencies designed to teach women trade skills, helping them to become master carpenters and electricians, in order to escape what my friends called the “service gulag” (i.e. the world of Molly Maid and restaurant work). According to these government employees, the under-educated working women were transformed when they attained a license, allowing them to achieve a fulfilling job that provided both financial independence and recognition as productive members of society, even as they remained subject to constant sexism at work and in the culture at large. These women no longer had to please an audience with their conformist appearance and accommodating demeanour. The fact that educational and economic capital are more enabling for women than their attractiveness score is why so many “ugly” career women are indeed the most content and grounded of all. Highly capable, intelligent, and confident women are also often perceived as the most threatening, especially to insecure men who find their own identities by either attacking or protecting what they perceive as needy, vulnerable, and dependent women. That is why the girls in “Am I Pretty or Ugly?” videos need to hear that they are smart and capable. Insisting that they are indeed pretty will, in contrast, only exacerbate the situation.