Fitbabe’s post about eating disorders has prompted me to think about patterns of food consumption, something of particular interest to me because these days I am food. Every three hours or so, I breastfeed my five-week-old son, amazed that my flesh seems magically to provide nutritionally balanced meals. This situation prompts me to rehearse a banal question: Is there anything more natural than the vision of a child taking sustenance from its mother’s breast? After all, my son eats when hungry and stops when satisfied, right? Wrong. A newborn’s nursing habits are actually pretty complicated. I wonder if studying them can shed any light on contemporary approaches to disordered eating?

“Just feed your baby whenever he is hungry,” advised the nurses on the labour ward. Feeding on demand is all the rage now. I quickly learned how to read my son’s hunger signs before he began crying; he would purse his lips, root with his nose like a tiny goat creature, and frantically suck on his own hands (sometimes inadvertently whacking himself in the face). I found these actions both adorable and irresistible, giving me new faith in the power of Biology with a capital B. Much to my surprise, I discovered that I was Biologically compelled to care for my child. I had long ago decided that the concept of a “maternal instinct” was total bullshit. I will still defend this stance with historical evidence, but must admit that I can no longer deny the pull of what has come to be called “nature.” Swollen teats now define me, making me feel like a barnyard animal. All the same, this nature turns out to be a little different than I was expecting, especially when it comes to my son’s eating habits.

The premise of current infant feeding doctrine is that newborns never under or over eat; they exhibit what could be characterized as a “natural” or “normal” relationship with food, treating it as fuel necessary for living and nothing more. As we grow up,  or so the story goes, culture intervenes to warp this inherently natural and neutral relationship with food, causing some people to engage in disordered eating. Various psychologists and social workers contend that certain people unfortunately become “emotional eaters,” consuming food for non-physical reasons. Others might over or under eat as a “confused stress response,” using food in an attempt to solve a problem that is actually unrelated to diet. I could go on at length, outlining the various categories of eating disorders, and the treatments meant to restore a state of normalcy. My point is that the current approach to correct eating is often based on a vision of the past as a kind of paradise lost: natural nutrition is ruined or replaced with artificial habits when culture intervenes. The solution? We must return to our better, purer origins. Paleo diet anyone?

But is food ever really just fuel, even for a newborn? I think not. The commonsense understanding of infant feeding seems to be a lie. The more I feed my son the more I realize that he increasingly eats for comfort, long past the point when he is truly hungry. He has also started to demand the breast in response to unpleasant situations, like after hearing a loud noise from a Game of Thrones DVD. According to Tracy Hogg, author of The Baby Whisperer, children have an instinctual need to suckle that has nothing to do with eating per se, leading her to recommend pacifiers or soothers as useful substitutions. She argues that newborns need to learn how to eat and sleep and pretty much everything else. They do not yet have a sense of their own bodily movements, boundaries, or needs. In other words, newborn babies do not yet have bodies much less natural eating habits. I am down with that idea. 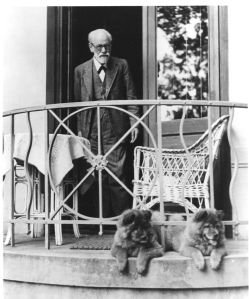 You can watch videos of Freud playing with his dogs at his former home/current Freud Museum in London England.

My endorsement of Hogg is partly based on my experience of breastfeeding one child for a mere five weeks. However faulty, my research methodology has precursors, especially within the world of psychology. Other scholars have produced theories about childhood development, distinguishing normal from abnormal behaviour, primarily by observing their own children or grandchildren. Does anyone still read the work of Jean Piaget, a twentieth-century Swiss developmental psychologist, who produced a model of cognitive change after studying his own children? And what about the sheer genius of Sigmund Freud? He came up with his theory of the “fort-da” game in 1920 after watching how his eighteen-month-old grandson reacted to the temporary absence of his mother. The boy would repeatedly throw a wooden reel out of his cot and then retrieve it by means of the attached string, saying fort, the German word for “gone,” and da, the term for “there.” Freud argued that this repeated activity staged the disappearance and reappearance of objects within his grandson’s reach, helping him to manage the stressful absence and return of his mother. The wooden toy thus simultaneously recognized and refused to accept a difficult situation. Many of us interact with objects including food to accomplish much the same thing.

Freud had a lot of interesting theories about breasts too. [Aside: I tend to ignore his writing on penises, preferring Lacan in that case. Encountering Freud is not an all or nothing situation]. Back to always delightful breasts: the most convincing argument ever made by the dog-loving Austrian was that of “propping.” Or at least that is what it is called by Doctors Laplanche and Pontalis in their now famous interpretation of Freud’s work, The Language of Psychoanalysis (1967/1973). They argue that the idea of anaclisis or propping was introduced by Freud to describe the original relationship, in the young child, between the sexual drives and the self-preservative functions. The sexual drives—think of libidinal energy generally, not adult sexuality—first prop themselves on the self-preservative functions, becoming independent later on. One especially convincing example of how bodily zones and instincts provide the basis for other desires is sucking at the breast. In this case, the need for nourishment (milk) becomes linked with satisfaction, which is transferred to the breast (object). Desire eventually becomes associated with the breast and other substitutions for it. So the instincts provide the foundation for cultural desires through an inevitable process of substitution. I learned about this theory—which actually makes nature and culture interdependent categories—while taking a graduate course on Freud from Professor Kaja Silverman in the early 1990s [name dropping alert]. My life would never be the same afterwards. True story. 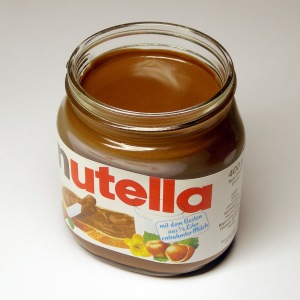 FFG is my bitch.

So why am I blathering on about psychoanalytic theory? Because it reveals that food is an utterly basic need which easily and perhaps necessarily becomes closely linked with any number of other objects and various kinds of satisfaction. The tendency to conflate food with emotions or wants is therefore “natural” or at least normal, and pretty much cannot be avoided. One could even say that the ability to have an utter detachment from or lack of emotion around food is perverse, and not in a Freudian good way; it is at odds with the human condition. That is why attempting to cultivate the notion of food as fuel will almost always fail, and not only for those 600-pound people on a reality TV show. The rest of us are also doomed so to speak, but we should not beat ourselves up about it. I am hardly “in control” when it comes to food, especially when faced with sugary treats or peanut butter. My solution? I will not bring irresistible snacks into my house. I have accepted that I am powerless in the presence of, for instance, a jar of Nutella. I am its bitch. I will always be its bitch. I do not have an eating disorder, even though I would regularly binge eat if left to my own devices. I am relatively normal. You may disagree. I must stress that these statements are not meant to imply that no one suffers from eating disorders. On the contrary; I think that such disorders are serious illnesses that must be treated, though likely not by imagining that food could ever be a neutral topic. My main hope is that anyone reading this post will come to recognize and accept their own minor food issues and supposed “weaknesses,” finding practical ways to manage them without judging themselves too harshly. Those with major issues should of course seek help, as Fitbabe recommends.

5 thoughts on “There is Nothing Natural about Eating”