After years of their mothers shuttling them around, grown children suddenly hate riding in cars with their mothers.

Flicking through FM radio this morning, while driving to the gym, I hear two DJ’s talking about a Twitter survey they had just conducted.  “If you had to take a long car ride with someone, who would you LEAST want it to be?” The first nine answers they received were, “My mother.”  One tweeter elaborated: because she “always talks at me, instead of watching the road.”

Great, I think, rolling my eyes.  More mother-loathing.  As if we didn’t already have enough of that.  Then I start reflecting on why adult children don’t want to spend time with their mothers.  My thoughts first go to appearance.  Women in their 40s and above aren’t exactly known for dressing at the height of adolescent fashion.  Teenage boys particularly don’t want to be seen with their mothers, because their friends might think they are still “tied to the apron strings.”

Is this the woman everyone is trying to avoid?

But as I reflect more, I realize that it isn’t just that young men don’t want to be seen with their mothers.  It is also that they don’t want to spend time with them, just the two of them, trapped, alone in a moving vehicle.  Why should this be the case?  According to the radio host, it is because mothers constantly pester their kids.  “How are you doing?”  “How’s work?”  “How is your girlfriend?”  Etc.

According to psychologist Deborah Tannen, it is this exact relationship dynamic – one of questioning by the parent, and reluctance to answer by the adult-child – that causes tension between parents and children.  Parents “needle” their children because they want to learn more about their lives.  Children resist such needling because they feel their parent does not respect their boundaries.   Adult children also crave respect from their parents, a recognition that they are now adults, making decisions.  Parents, for their part, can feel hurt by their children’s independence, interpreting it as willful dismissal.  My children no longer respect me, they might think.

As I continue driving — having switched to another radio station, unable to stand any more mother abuse — I consider my own mother.  I have spent more time with her in the past year than I had in the previous 15.  It has not been easy.  Small situations escalate quickly into power struggles, each of us demanding some vague deferral from the other, each of us refusing to budge.  Take meals for example.  During family get-togethers, I prefer a casual approach to food, with people eating what they want, cleaning up after themselves.  My mother, in contrast, prefers to prepare all the meals from scratch, to establish set meal times, and to play with my son afterwards while others do dishes.  To me, this feels controlling.  It also feels gendered.  Why should my mother make the food while my father relaxes?  Sure, he occasionally barbecues, but even then, he only barbecues food my mother has prepared.

Mother blaming—similar to mother avoidance—has been popular for, say, around the past 150 years. Blame Freud (see below).

Note, however, that I haven’t actually discussed any of this with anyone.  Why?  Because I feel guilty.  Guilty for not wanting my mother to take care of me, for not wanting her to feed my son, for not wanting to do dishes while she has clearly cooked all day.  Surely, I think, I owe deference to my parents, seeing as how they gave me 18 years’ worth of love, food, and shelter.  It is not my place to question their traditions.  Rather than tackling this situation directly, therefore, I allow it to simmer.  Soon I’ll slip into avoidance mode, I think. That will certainly be healthy.

As I drive on — almost at the gym!  — my thoughts drift to my son.  After gestating him for almost 10 months, I birthed him and, as of this writing, have nurtured him for almost a year.  There will be a day, though, when he will walk out my front door, to return only as a visitor.  I prepare myself for this often.  I refuse to become one of those mothers who gives up her identity for her children, and who pines, mournfully, for their return.  This kind of mother, I think, is pitiful.  She invests herself in the lives of others, without becoming the wonderful, independent being she could very well be.

Yet even as I think this, I know I am being unkind.  For many women of my mother’s generation, wifehood was the only viable economic option.  Even today, I know why so many mothers seemingly forget who they are.  “Selflessness” is constantly praised as a feminine virtue.  More than this, childcare is expensive.  Many mothers prefer to quit their jobs rather than put their children in the care of others, where, they fear, they are never as well-taken care of as they are at home.  Some women trade in everything they have — their education, their careers, their RSPs, their vacations, their gym memberships, their hobbies, their friends, their spare time, and their possible futures — to provide what they think is best for their children.  (I am speaking generally, here.  Fathers are many children’s primary caregivers.  As are guardians, siblings, and foster parents.  In no way am I advocating mother primacy.) 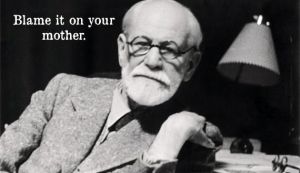 Another whole post needs to be written on our obsession with mothers: what mothers do and don’t do , and how they ruin everyone’s lives.

And then I think, as I head into the weight room, that it is all just sexist bullshit.