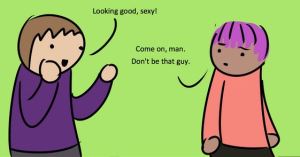 Since moving to a new city a few months ago, my fitness routine — and my life in general — has drastically changed.  And not for the better.  After the dust of moving settled, I have simply been astounded at the rampant misogyny that exists here.  I was going to say I was “culture shocked,” but that’s too polite.  It’s not culture shock.  It’s pure old-fashioned sexism.  Based on the not-so-random sample of my own experiences and what I have heard and observed, it’s clear that some men here really, really hate women, and will do everything in their power to tear them down.

What is my point here?  My point is that certain men here are really, really awful toward women.  In public and semi-public places, they feel comfortable remarking on women’s bodies and openly leering at them.  In case you’re wondering if I’m being overly sensitive, I’m not.  I have lived in seven other cities before.  Never have I noticed this level of harassment.  Moreover, I am now older.  In other words, my level of conventional heterosexual attractiveness has declined.

What have been the consequences?  I have changed my routines, my clothes, and my demeanour.  No longer do I cycle to work.  I drive.  No longer do I jog in public.  I go to the gym.  No longer do I wear wicking sports tanks when exercising.  I wear my husband’s baggy cotton t-shirts.  For the record, I also wear a ball cap.  And, no longer am I “nice” in public.  I am stern, focused, and efficient.

I am not pleased about any of this.  I am in fact deeply angry that the misogyny that exists here has caused me to restrict my civil liberties, to contribute to further exhaust pollution (vis-a-vis driving), to curtail my enjoyment of the outdoors, to put on my resting “bitch face,” and to even change how I dress.  I am also very upset that the sexism in this city has caused other women, such as my realtor, to question their value as professionals and as human beings.

Am I over-reacting?  No.  Research indicates that targets of street harassment frequently adopt these tactics.  It also indicates that the threats of violence contained within catcalls and other forms of intimidation has caused many women to fear for their lives in public.  Did you know, for example, that some men use catcalls as a form of “rape-testing”?  They will catcall a woman to see if she stays silent, thus demonstrating her suitability as prey (http://www.nancyleong.com/race-2/the-cumulative-effect-of-street-harassment).  As a result of my own fears triggered especially by drive-by gawking, I have shopped for a go-pro camera to wear on my bike helmet.  I have also looked into whether street harassment is punishable by law.  The jury is literally out on this one, with some jurisdictions defending it as “free speech,” and others defining it as assault (http://scholarship.law.cornell.edu/cgi/viewcontent.cgi?article=1141&context=facpub).

I hope to one day return to my former routines.  And maybe even wear a sweat-wicking tank again.  But right now I am very busy.  And also very tired.  Which is why I am engaging in small battles.  Like raising awareness online.  Eventually I plan to work with community groups here, gathering research on street harassing, and publicizing the consequences.  One day, I’d even like to work with schools and agencies on educational campaigns.  These are not perfect solutions.  But when the alternative is either “ignoring” the hostile displays of male privilege that exist here, as one person suggested, or taking them as “compliments,” as another offered, they are in fact the very least I can do.

2 thoughts on “Why I Wear Men’s Shirts to the Gym: Guest Post by Hissy Fit”