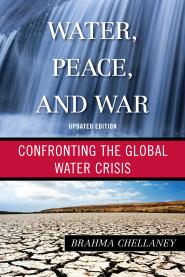 Are fat people destroying the environment? Yes, says Brahma Chellaney, a professor of strategic studies at the Center for Policy Research in New Delhi. According to Chellaney, the “obesity epidemic” is a key cause of the global water crisis. He writes that:

Chellaney goes on to argue that fat people use cars more than others, and eat more food that is transported by ground or air. What’s more, the agricultural practices on which the obese rely require immense amounts of water, especially for the wheat and corn used to feed chickens, pigs, and cattle. The author wonders why the obesity threat to water resources and the environment has received so little attention, concluding that “Staying slim is good for individual health and for the health of the planet” (83). 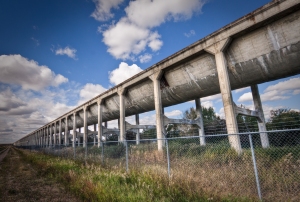 I was shocked to read Chellaney’s claims about how obese people are harming the environment and wasting increasingly scarce water supplies. I had picked up his book in order to learn more about global water policies, part of my new research on the Brooks Aqueduct Provincial Historic Site, located just outside Brooks, in southeastern Alberta. This now defunct aqueduct was built by the Canadian Pacific Railway between 1912 and 1914 to irrigate dry prairie lands, turning them into an agricultural oasis. The results were mixed, and the remaining concrete ruin is an impressive and crumbling monument to the failure to control water. I could say much more about my latest obsession, but this fascinating historic site is not the subject of this blog post. Instead, I am concerned with the author’s seemingly easy references to the “obesity epidemic” as one of the major causes of environmental decay. Is his thesis yet another example of fat phobia and the scapegoating of obese people? Or is there more to it?

In many ways, Chellaney’s book is well researched. I learned a lot about what he calls “hydropolitics,” especially the ways in which national efforts to control water have contributed to wars in the past and fuel conflicts in the present. I was terrified by the author’s reports on current water scarcity and his prediction of future water wars unless peaceful solutions are found. These solutions require countries endowed with water to share with others. Canada has the most per capita water resources in the world, but we are not going to share them willingly anytime soon, especially not with the United States. One stereotype about Canadians is that we are polite and mild mannered, given to diplomacy. Except when it comes to our water. Keep your f-ing hands off of it! When fresh water sources are involved, Canadians are like the Fear the Walking Dead characters on the yacht, refusing to save the hordes on the small life boat. Tough crap for you! [Aside: I was hoping that the FWD cast would help the people on the life boat. Maybe the desperate newcomers would be better actors who could kill and replace the current cast].

Despite the many strengths of Chellaney’s book, he unfairly targets obese people. He should in fact target all wealthy North Americans and privileged westerners. I highly doubt that my fatter neighbours consume more resources than me. I pride myself on using public transport and walking instead of driving, on buying used clothes for myself and my family, on living in a downtown condo that is far smaller than I can actually afford. I am part of the solution, not the problem, right? Wrong. I waste energy and water as much as anyone. I barely think about the amount of water I use, giving my son a nightly bath, flushing the toilet at will, running my dishwasher and doing a load of laundry every single day. More significantly, I eat foods that require a great deal of water to grow, including chicken and the local produce that relies on irrigation. Chellaney taught me that the 100-mile or “eat local” diet is not necessarily the most environmentally friendly one. Most water in North America goes towards agriculture, not personal home use. Who cares if the beets you eat were grown by nearby Alberta farmers if they required massive amounts of water to irrigate formerly desiccated lands? Maybe it would be better for the environment to import products grown in more fertile lands that rely on rainwater even if they are far away, after all. Thinking about food and other consumer goods in terms of water use is a game changer. Oil and gas are not the only resources to consider.

In the end, I think the “fat North American” is easily identified with gluttony and over-consumption. Their supposed greed is visibly evident. But pointing the finger of blame at the obese does little to help the environment, when we should all consider our consumption patterns, especially the way in which we—and here I mean I—take water for granted and think about food in terms of calories or the distance from which it was imported. Chellaney may be fat phobic but he is absolutely right to encourage us to think about how much water was used in the production of the food we eat and the goods we consume.

2 thoughts on “Obesity and the Environment”