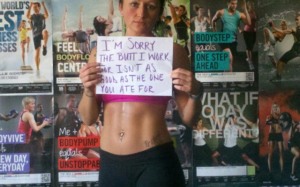 From an article called: “Fit shaming is the new fat shaming: Have you been a victim?” See http://www.fitnflexed.com/article/fit-shaming-rise-have-you-been-victim

I was going to title this post “Is Fit Shaming a Thing?” but someone had already used it. In fact, I found quite a few discussions about “fit shaming” online, dating from 2014 to 2016. In theory, fit shaming is when people who are fit and healthy are criticized for being obsessed and made to feel ashamed of their bodies, based on assumptions about their lifestyle and narcissistic mentality. Some bloggers insist that fit shaming is simply the opposite of fat shaming. They argue that it is discriminatory and wrong to ridicule fit people, just as it is wrong to exclude or make fun of fat people. Others, including the woman who writes at “Iron Beaver Fitness,” provide a more sophisticated view, understanding that being fit is privileged in our society and cannot be shamed in the same way as fatness http://www.ironbeaverfitness.com/articles/2016/7/31/is-fit-shaming-a-thing.She notes along similar lines that white people cannot experience “reverse racism” and men are not subject to “reverse sexism.” I agree with the lady with the iron beaver. Such invented “reverse” categories deny the existence of institutionalized privilege and relations of power; they ignore long histories of discrimination. In short, they are complete bull shit. Thin people are currently privileged in our society, regardless of their level of fitness. And although fit people are not always thin, there really is no such thing as fit shaming.

Displays of strength, agility, speed, and flexibility tend to be met with praise, notably in our hero worship of professional and (sometimes) amateur athletes. I have never witnessed or been subject to fit shaming. I have never had anyone yell “gross” when I am pushing a loaded sled across the gym floor or doing a tabata workout with my new gym partner, she who has yet to be nicknamed [Update: Henceforth she shall be called “Dr. Ironcore,” or DI]. My chest presses might surprise the young men in the weight training area, but I doubt they think that I am disgusting. I doubt they think about me at all. The display of fitness has little to do with appearance and everything to do with physical performance, including a wide range of activities like ballet dancing and wheelchair basketball. I realize that female shot putt athletes and gymnasts were ridiculed as fat at the 2016 summer Olympics, but those were grotesque cases of misogyny and racism, not fit shaming. Most people admire the kind of dedication and ability exhibited by fit people in action—ideally fit male people—heaping praise upon them. 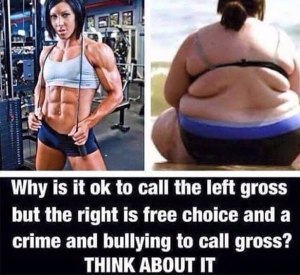 In contrast, the display of visible musculature is openly and easily subject to criticism, especially when those muscles are grown by women. This is a bit confusing because sometimes muscularity is conflated with fitness. This slippage between muscularity and fitness is understandable because visibly muscular people are usually quite fit, depending on how fitness is defined. Sometimes people can be strong and ripped while lacking flexibility, cardiovascular capability, agility, or hand-eye coordination. For the most part, however, visibly muscular people have the whole package and can be seen jumping up on high benches and running stairs before hitting their personal best max dead lift. While I openly applaud these people—I will give a nerdy thumbs-up to ripped women doing Turkish Get Ups at the gym—others find them horrifying. The critics do not cast shame on the fitness levels of these individuals; they condemn their bulging biceps and six-pack abs. Back in the day, I was shamed for having a visibly muscular upper body. Young women at the gym would say “Ugh I would never want to look like that,” quite loudly in my presence but it was much worse in public places. The photos of me on stage during my figure competition were savagely attacked by internet trolls in 2011, just the tip of the iceberg compared to what women who are far more muscular than me face every day. Many friends of mine with what I consider to be beautifully muscled and vascular arms are openly derided as disgusting, told that they are unfeminine, and warned that men won’t find them attractive (as if that was the ultimate goal of female existence). Although women are particularly subject to this kind of sexist discrimination, I suspect that extremely muscular men also hear negative comments and experience body shaming. At the very least, they are accused of using steroids, based on the false assumption that muscles will rapidly grow on their own after taking supplements. All the same, none of these cases constitute fit shaming. These efforts to shame others are based on the perception of excessive muscularity, not excessive fitness.

Why do muscular bodies invoke this kind of reaction? I have a few suggestions. For one thing, it is practically impossible to be visibly muscular by accident. Sure there might be some shredded farmer somewhere, who simply gained muscle mass through plowing the fields and lifting bales of hay, but I doubt it. Growing large, balanced, and proportionate muscles takes dedicated and consistent hard work and knowledge, coupled with an interest in proper nutrition. Diet is essential to visible muscularity. Trust me, I know. I lift heavy and work out six days a week, but I now overeat and my absolutely massive muscles—ha ha—are covered in fat. No one gives me a hard time about my appearance anymore, though I am technically just as muscular as I was before. As far as I can tell being fit is fine and being muscular is fine. But displaying deliberately grown muscles like a big feeling prick is not fine, especially at a Planet Fitness gym.  Why should this be the case? 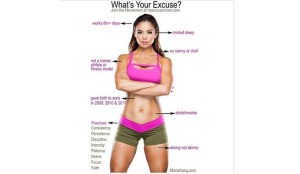 While visibly muscular people, especially women, are regularly accused of narcissism, this is not really the problem. Women are encouraged to care about their appearance and to spend time “improving” it with make-up and hair care products. Women who refuse to conform to standards of attractiveness will be punished in numerous overt and subtle ways as they go about their everyday lives. The issue lies elsewhere. In my opinion, the visibly muscular body is objectified and subject to stereotyping. Some audiences view muscular people as things, assuming that muscular bodies convey clear messages, usually messages aimed at them. From this point of view, visibly muscular bodies insult others, telling presumably unfit and unmuscular people that they are fat, worthless, and lacking in self-discipline. Now this kind of misreading of the muscular body is understandable, given the media portrayal of Jillian Michaels, Maria Kang, and that horrible model who photographed a larger woman showering at the gym. Those muscular women did insult and fat-shame others. It does not follow, however, that all visibly muscular bodies send the same negative message, nor any message at all. You know those muscly fit dudes in the weight lifting area? Those bros wearing skimpy tank tops and backwards ball caps? What do they think of people with soft flabby arms at the gym? Probably nothing at all. Those guys are serious about working out and do not care who else is there or what they look like as long as they follow gym etiquette by not crowding them or standing in front of the mirror or leaving weights lying around on the floor or smelling really bad. It is the same for those gorgeous women who wear tiny bras and have giant “she squats” butts. Those ladies do not give a shit about you or me. They do not give a rat’s ass about anyone with less muscle than them. They have goals and plans and probably a complicated life. Their appearance is not in and of itself oppressive to anyone.

I don’t look like this anymore, and am no longer criticized by strangers.

This rambling discussion brings me to the issue of dress codes at the gym, especially those that require people to cover up their midriffs and shoulders. I call bull shit on them. Such rules are discriminatory and should be illegal. Muscular shoulders do not send a message to fat people. Six pack abs do not infringe on the rights of anyone else. People who feel uncomfortable around such muscular bodies need to reconsider the source of their discomfort, potentially locating it in dominant cultural norms rather than individuals. There are many legitimate reasons for fat or unfit people to take issue with the fitness industry—and here I am referring to the commercialized nonsense you see online and on TV, not actual fitness professionals who are well educated and regularly work with a diverse range of clients. But the best way to feel comfortable at the gym is to engage with such fitness professionals and learn how to work out. As a middle-aged, no-longer-visibly-muscular woman I feel completely at ease in any gym, with any number of hot men and women around me. I now work out regularly at the gym on campus, and I am almost always the oldest and least attractive person there. I am nevertheless comfortable because I know how to train and use all of the equipment, without annoying those around me. I would not feel better or fitter if all undergraduates were forced to wear baggy t-shirts.

9 thoughts on “Shaming the Fit and Muscular”