This title is meant to recall the title of the best-selling book, The Last Lecture (2008), written by Randy Pausch, a professor of computer science who had terminal cancer. Just before his death he delivered pithy life lessons to his students, or at least I think so. I have not read his final words and have no interest in doing so. I thought of Pausch’s book today only because I taught my last spin class, after offering between 2-4 classes per week for the last five years. Although I am not dying anytime soon—thankfully I am fit as a fiddle—I did feel a sense of loss when I decided to throw in my cleats.

One person showed up for my last class. The gym was a virtual ghost town, with no one lining up to claim a stationary bike at noon on December 30. The sole participant was a regular who is about my age and extremely fit with bulging quads. I increased the difficultly level of the class for his benefit. He actually broke a sweat and grunted with exertion a few times. When the class was over we shook moist hands and that was that. I was no longer a spin instructor.

What, if anything, had I learned while blaring Nirvana and shouting at people from the front of a spin room for half a decade?

1) Participation is overrated. And by this I mean active participation, with hearts and minds engaged to the fullest. For a long time, I tried to teach my spin classes as if I was a professor, i.e. a good professor, not a distracted one with a hundred other things to do as usual. I would take drill and song requests at the beginning of each class. I changed the music and the choreography every single week, making theme based musical arrangements. One week was devoted to 1970s UK punk (hello Slits), another to songs containing drug references. My all-time favourite class was “songs that suddenly change tempo.” My opera theme was not a great hit, but the participants liked the weeks featuring music from such cities as New Orleans, New York, and Seattle. I tried to remember the names of each person in the room, and then have them contribute by taking turns telling the rest of the class at which tension we should do sprints and what not. After quite a long while I realized that I was the only one enjoying all of the effort and variety. I finally stopped, realizing that people coming to do a spin class simply want to get a good work out without any bull shit, and without having to think too much. I get that. I used to love having a personal trainer and taking such group ex classes myself precisely because it was a rare moment in my life when I was not in charge, making decisions, responding to emails, writing a paper in my head and filling in an expense claims form while making a grocery list and doing the laundry. Blindly following an awesome task master can be relaxing and meditative. A spin class can provide a temporary release from responsibility and that is part of its appeal.

2) There is no average fitness participant. I could not “teach to the middle” because a wide range of people could show up to each spin class, from the woman who ran Ultra-marathons to that guy who could not raise himself out of the saddle. I would try to judge fitness visually, for what other options did I have? Mainly I focused on posture, looking to see if a new member had proper form on the bike or was hunched with slumping shoulders. Fitness has little to do with body weight, and anyone with even a minimal education in the fitness industry figures that out quickly enough. Because it was difficult to determine the diversity in each class, I would offer many options and alternatives, a standard approach. I did not do as I was instructed during my own group ex training: “teach the newbies and let the fit regulars take care of themselves because they already know what to do.” I did not want to discriminate against fit people, so I often addressed a higher than average fitness level, adjusting the difficulty and number of drills based on the performance of the members present during each class. I do the same as a professor, refusing to teach to the lowest common denominator. While I do not assume prior knowledge of the subject in question—the early modern body or Renaissance art—I also do not assume that most students are dullards completely lacking in curiosity or interest. Anyone looking for an easy bird course can always drop out of mine, or write nasty comments on Rate My Professor.com, not that anyone reads that site anymore, do they? No matter.

3) I taught spin classes for myself, for my own enjoyment, just like I am a professor for myself because I love writing and doing research. I did not become a spin instructor for the money or the status, which are not exactly overwhelming. I always felt great after teaching a spin class, even if it was difficult to get there on time, pulling myself away from other work. I would be overcome by a wave of adrenalin by the second or third drill. This experience was very relaxing for me, almost meditative. I am not the type to relax otherwise. I do not want to lie down on the couch, ever. That’s too boring and in any case I don’t ever feel that tired, even after working all day without breaks or lunch, literally running from one thing to the next. A hectic schedule is not that stressful for me and I usually feel fine. Still, teaching spin classes offered a nice distraction and a kind of mental health break, something that does not make sense to people who hate working out. Working out is crucial for the overall health of many people, especially those who are not restful in more conventional ways.

4) I stopped being a spin instructor for myself as well. I need to work out harder and more efficiently, getting to the gym when it suits my schedule, not when the spin classes are scheduled. I plan to work out six days per week as usual, but do so in the mornings when I have flex time. I am also training a few times a week with Dr. Ironcore, which is great because she is an amazingly fit and positive art history professor (who knew such creatures existed?). I need to get “back into shape” though I never stopped going to the gym per se. I just stopped making it one of my top three priorities, and I regret that. Working out slipped down the ranks, given my (for some reason) ever increasing workload—am I not supposed to be slacking off and coasting toward retirement by now?—dedication to my beautiful, funny, and energetic son and “unflappable” LSP, and volunteer work, helping three Syrian refugee families. All of these things are so rewarding, I do not want to “cut back” and do less. I also need to focus more on my own nutrition because it usually comes last, after working, helping, cleaning, cooking, shopping, planning etc. I am a typical woman in that way, but I also have an awesome cleaner who comes once a week to do the floors and nursery. She is about to show up now so I had better wrap this up and head to the art gallery where I am helping to install a show that I curated called “FLUX: Responding to Head and Neck Cancer.” Please come to the opening or drop by if you happen to be in Edmonton this January 2017. Oh yeah: Happy New Year! 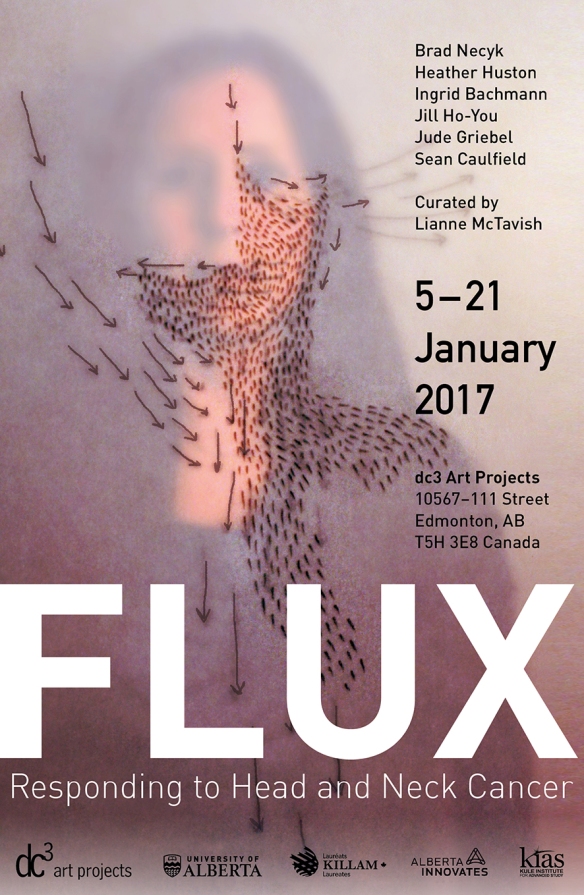