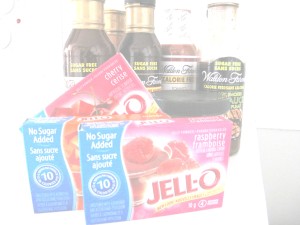 Please consider this entry your personal invitation to my post-competition brunch. While most bodybuilders dream of what they will eat after their gruelling diets have ended, I fantasize about the foods I will prepare for friends. I can’t help but recall with pride the brunch I staged after returning from Montpellier last summer. I made, among other dishes, ten-layered crespeou, ratatouille with fennel, and creme brulee, already described in a previous post called ‘Baking as a Political Strategy.’ Laid out on a yellow tablecloth with matching linen napkins I had purchased in Toulon, this meal for sixteen featured opaquely purple eggplants, shiny spiced olives, piles of glowing lemons, bunches of green basil, freshly chopped mint, and darkly alluring dates. In a shocking diversion from bodybuilding protocol, I prefer fresh fruits and vegetables to carb laden meals from the IHOP. And no I will not be going to Boston Pizza after my show in June; or ever. Ugh. Call me a snob if you must. Go ahead, just say it out loud. I care not, for I am feeling pretty damned good after eating my cheat meal today. Returning to a favourite Japanese restaurant, I devoured edamame, grilled asparagus, spinach rolls, bean sprout salad, and chicken teriyaki. I didn’t even bother with the rice, saving up for the yogurt-based dessert I had later, while watching Thor 3-D with my partner. ‘That’s not a cheat, you jackass,’ I can hear G-Smash—also currently dieting—sneering as she recalls her pizza and cinna-pie feast. ‘Oh, really,’ I pithily retort, ‘ and what about the non-low-fat soy sauce and sesame paste I added? In your increasingly hollow face!’ But enough of the competitive cheating; my mind has returned to the kitchen, where I will soon be wearing a figure bikini, high heels, and an apron that says ‘Mr. Good Lookin’ is Cookin.’ My favourite one is in the wash. It reads ‘I rub my meat for two minutes.’ I cannot fucking wait to chop roasted almonds in order to make biscotti, squeeze lemons to stir into the curd bubbling away on my stovetop, and perhaps even roll grape leaves stuffed with minced parsley and sunflower seeds, just like in the old days. But what will I cook for my thin-skinned friends who will still be dieting throughout the summer months as they aim for Provincials, North Americans, and/or Nationals? We all know what a Bodybuilder’s Bitch would look like (hint: me). What on earth would a ‘Bodybuilder’s Brunch’ resemble?

Wonder no more, for I have a few ideas: a Bodybuilder’s Brunch would be just as colourful as my south-of-France spread, looking something like this: 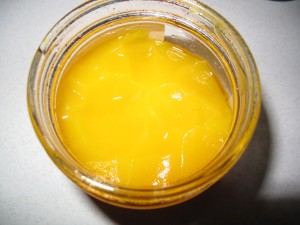 It would include many chemical concoctions, heated then stirred, melted then chilled. I would make my clen-shaky guests stacks of protein pancakes, serving them with 0 fat, 0 sugar, 0 carb, 0 calorie syrup. I could also whip up egg whites with splenda to create slightly crispy waffles topped with the 0 fat, 0 sugar, 0 carb, 0 calorie ‘marmalade’ glowingly pictured above. What the fuck is in that stuff? That is a very good question, and I will send a prize FFG t-shirt to anyone who can discern the ingredients without researching them online. The orange melange is produced by a company called Walden Farms, though I doubt that any of its contents came from a farm. Unless farm is actually code for ‘pharm’aceutical laboratory. This orange gel tastes exactly like creamsicles and I love it. But what the hell to do with it? I will certainly not be slathering it onto forbidden love toast. Maybe my dentist can mix it with fluoride and pour it into small u-shaped troughs for teeth soaking purposes. Then again, fluoride might already be one of the main ingredients. Bodybuilding is about the health of the whole person, after all.

Apparently this guy is a man-whore. Take note MW.

I know what comedian Jim Norton would prepare for brunch, and it would not be fat free. My partner and I learned about Norton’s breakfast habits while watching his HBO special called ‘Monster Rain.’ The attractive comedian was explaining that his new girlfriend had heard tell of his slutty reputation, requesting that he undergo HIV and STD testing before agreeing to have sex with him. He immediately complied, but sometime later, after the relationship had progressed, he naturally asked her to eat his ass. She balked, demanding even more paperwork, in the form of anal clearance from a licensed physician. Ever obedient, Norton returned to the doctor, received his bill of butt health, and then taped it to his naked back before bending over to shout ‘brunch is served!’ to a relieved and excited girlfriend. Finding this discussion hilarious, my partner and I now regularly bend over while making the same exclamation, except that we do it fully clothed, in public places, like the supermarket. So far, no arrests have resulted. Helpful advice: If you ever see a man wearing jeans and a Full Tilt poker t-shirt lean into the frozen food section and holler ‘come and get it,’ please go over and introduce yourself to my partner. What happens after that depends on your tolerance for risk.

Clearly, the foodie in me lives on, despite this never ending diet—it has now been over four months—and its dwindling list of ingredients. After my carb fiasco of last week, QMR cut my almonds and butternut squash. This week the protein powder is gone. Down but not out, I continue to create what are to me new meal items. While recently organizing my cupboards (again), I rediscovered my trusty waffle iron and heated it up. Whipping my daily allowance of eight egg whites into a frenzy, I experimented by adding different amounts of wheat bran, banana extract, vanilla, almond extract, cinnamon, and even coffee. All results were topped with the delightful farm-fed ‘syrup’ mentioned above. These efforts to stretch if not exactly break the rules of my diet brought to mind the theories of a certain French philosopher, and get ready to rock, because I have not mentioned him before. It’s Michel de Certeau, known for his distinction of ‘strategies’ from ‘tactics.’ According to de Certeau, strategies are the rules created by producers linked with institutions and structures of power, whereas tactics are the actual practices enacted by individuals who are influenced but not entirely confined by those rules. Would an example help? Think of those well-trodden short cuts that crisscross university campus lawns despite the plethora of nearby sidewalks carefully laid down by planners. That’s what I call sticking it to the man! My current tactics involve food subversion or reconversion, but maybe I should rethink the upcoming competition itself. I might like to challenge its rules as well, perhaps by pulling foam inserts out of my bra, like that beauty-pageant-winning feminist who suddenly revealed the message that ‘pageants hurt women.’ This tactic would not work for me as I no longer have breasts—I think they will grow back, at least that is what I have reassured both myself and my partner—and I cling to my boob padding like Ogre clings to the keys of my partner’s  laptop, gleefully ripping five of them out. Instead I could defy the restrictions of Bikini Bite by pulling down my sparkly blue bottoms, lifting my ass up like QMR is always telling me to do, and then aiming it at the audience. I think you already know what I would shout.

1 thought on “Brunch is Served”