This past week was a media frenzy for FFG. After my research project was featured in the Edmonton Journal, the story was picked up by the National Post, and just this morning I was interviewed for CBC’s Q by the adorable, velvet-throated Jian Ghomeshi. Sigh. When his producer asked me to be on the show, I immediately blurted ‘Oh yeah, I have a big crush on Jian!’ [Edited in October 2014: I greatly regret writing this paragraph after learning that eight women have recently come forward to report their abuse by Jian. I believe these women and now feel only disgust for him].Other figure girls feel the same way, and my friend Fitbabe—I added her to the Glossary—wondered if he was single. I meant to inquire about his status this morning but completely forgot, becoming overwhelmed by my studio earphones, round microphone, and mug of water. I equally heart Stephen Colbert, so call me you uptight sexy hunk of manhood! I usually screen but will talk to you anytime. Or at least my publicist will.

Equally hip with his tat.

It is very nice to have such interest in my work, including over 15,000  hits on my blog site and many personal messages filled with admiration. Not all of the feedback, however, has been positive. The comment section of the on-line version of the National Post included nasty insults about my appearance. To summarize: I am butt ugly and look like a man, and want to be a man, and obviously hate men, and clearly am a lesbian. Why yes, you clever nimble- fingered fellows, that all follows quite logically. But seriously, these assertions provide me with more great content for my book, indicating that my muscular build is threatening (at least to some) and resists gendered categories. Despite what I consider my girly looks—notice the long hair, high heels, delicate jewelery, heavy make up, and claw-like finger nails—my visible muscularity cancels it all out, transforming me into a category-defying freak. One Web site even  reproduced multiple pictures from my blog, repeatedly pointed out my monstrosity, and then helpfully included an image of the body that any heteronormative male would prefer. The woman depicted is awkwardly posed with her ass out and huge breast implants pushed up. Message sent and message received, guys: off to the surgical clinic I go, to achieve this more naturally feminine look. 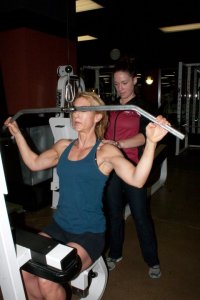 Is this any better? No? Guess it’s back to the drawing board…

What’s funny is that I deliberately lost muscle for my competition, striving to achieve the ‘softer’ look required for figure contests. Those haters would have hated me even more about four months ago, as indicated by the photo pasted above. I am galled by the notion that they would approve of my body right now: I have gained at least 20 pounds during the past month. That’s right, my friends, the indulgent eating frenzy has not abated. Just yesterday, I was in line at the drug store buying more tasty snacks, when the middle-aged man behind me placed his hands over his eyes and began muttering: ”They have no intelligence. They are just robots.’ Maybe I am a little sensitive these days, but I assumed that he was describing me. Had I become robotically lifeless? I think not. No machine could feel this degree of unrestrained delight while eating a chocolately licorice log.

Speaking of food, I finally made my Cajun feast-meal this weekend. It actually took me four days to produce and I have uploaded the menu to a new recipe section of this site, hoping to please the various foodies now subscribing as fans. I thoroughly enjoyed making enough food to feed an army—in the end I had 14 guests—relying on a down-to-earth cookbook that I had purchased in Lafayette (see the post entitled ‘Ragin’ Cajun’). It included home spun community recipes, with such directions as ‘prepare biscuits as you normally would.’ Hmmm. Okay then. The chicken dish simply said ‘Next, fire.’ With only a moment’s hesitation, I doused that poulet with brandy and threw in a match. Burn baby burn.

My favourite creation was the crawfish etouffee, but Ogre preferred the pecan pie. While I was making it, she crept into the kitchen and stuck her entire face into the softened butter, literally inhaling it. Afterwards, she had a stomach ache and needed a sponge bath. What a dumb ass.

Back to the important matter at hand, namely my body. This week my body officially went public; moving out of the private realm, it was offered up to scrutiny and judgement, even moreso than during the competition itself. I was reminded of a recent conversation I’d had with a fabulous women’s studies professor and mother of a two-year-old. When I expressed surprise about the way in which strangers would now address me, asking for fitness advice or offering their opinion about my physical condition, she said ‘that’s what happened to me when I was pregnant.’ As analyzed by Iris Marion Young, the pregnant body is considered more public than personal, more like an object than a subject, and people feel authorized to claim it. Anti-abortion activists are at the extreme end, wishing to revoke the legal rights of pregnant women, but other interventions are less radical, and include glances of approval, or hands that reach out to touch a stranger’s belly. Are male bodies ever treated in this way? This is a sincere question. Maybe when they are ill, in a hospital setting? With her muscular frame G-Smash is often objectified by others. Certain middle-aged men will even flex their puny biceps next to hers, a practice that I find puzzling. Are they making fun of her or of themselves, engaging in a comedic pose down to compensate for their flabby emasculation? This is making my head hurt, but it is enlightening to consider the status of my body and its shifting relationship with the category of ‘person.’ It is also enlightening (and saddening) to realize that fame does not always coincide with fortune. 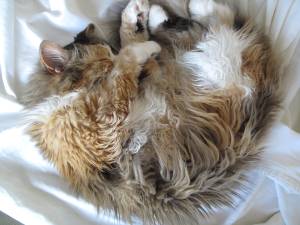 Ugh, I am filled with gassy regret and hereby vow to eat clean from now on.

9 thoughts on “Shout Out to Haters!”