Looking back to 2012. My ideal body is big and strong.

Do you long for a “simpler time” when you had a better, fitter body that was under your control? Do you keep an image of this body in your head, using it as an ideal against which to measure the present? If so, like many other people (especially women), you are engaging in body nostalgia. END_OF_DOCUMENT_TOKEN_TO_BE_REPLACED

I recently purchased Jen Sinkler’s Lift Weights Faster, a library of body weight, kettlebell, and barbell workouts. I love training and look forward to it, but these days I am pressed for time, not to mention sore from lifting and carrying around my built-like-a-hockey-player son. END_OF_DOCUMENT_TOKEN_TO_BE_REPLACED

I have been thinking about “food ways,” both because it is a hot topic in the field of early modern studies, and also because I am in Italy, learning from the experts. For the most part, traditional Tuscan food is locally grown, available at colourful markets, and prepared simply, without added ingredients. I love to order spinach as a contorni at a restaurant because it tastes exactly like spinach with a hint of fresh olive oil and maybe some garlic. There is no need to disguise that wonderful flavour. Yet the most important part of Italian food is not the items grown and consumed; it is the culture of food, which includes a great respect for preparing and enjoying meals in social settings. Italians typically take hours to have lunch each day with their friends and families. Much to the surprise and shock of North Americans, shops and businesses will close between noon and 2 or 3 pm (sometimes for the entire afternoon). “How can the Italian economy survive?” END_OF_DOCUMENT_TOKEN_TO_BE_REPLACED 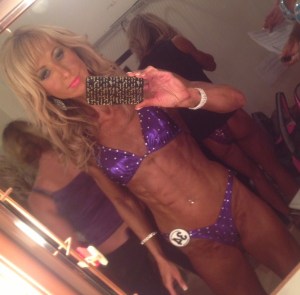 PDDs backstage during her Figure competition in June 2013.

At this time last year I was working towards my goal of competing in the Figure category of the 2013 ABBA Bodybuilding show. The past 11 months have been filled with many ups and downs as well as some nearly epic fails. Yet somehow, I’ve managed to succeed!

END_OF_DOCUMENT_TOKEN_TO_BE_REPLACED

‘I have a terrible secret that puts most men off,’ admits the esteemed British scholar seated next to me at a chi-chi restaurant in Fort Worth, Texas. All four members of an earlier conference panel on sixteenth-century gynecology laugh before taking a communal sip of Royal Tokaji. Though I am regretfully far away from my lift and bitch companions, the conversation has taken a familiar turn toward the vicissitudes of online dating. The prize-winning professor who is fluent in ancient languages has been amusing us with tales of senior romance. Those oldsters can be surprisingly naughty, sometimes in groups of three or more! In any case, once she decided to settle down and find ‘the one,’ the doctoress had constructed her profile carefully, running it past savvy friends, before deliberately excluding references to her high level of education, and including visual evidence of her possession of relatively normal limbs and a smooth rather than humped back. ‘After confessing to being an academic,’ she explains, ‘I needed to reassure potential suitors that I was not as weird or freakish as they might have expected.’ At this point you should picture three wise female professors—one in her 40s, one in her 50s, and one nearing 60—advising a younger assistant professor to stop restricting her dating interests to fellow scholars; in fact, we agree that she should avoid them altogether. ‘And what does your partner do?’ the lonely lady asks me. ‘He plays poker and has a sunny disposition,’ I brag. The two other partnered women nod in sage approval but the single one seems dubious. For you see, dear readers, she is naïve, and has not yet been in love. In fact, she has not even been to her first rodeo. I invited her, but she said no. More about that later. 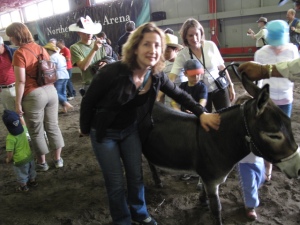 All I did a few years ago at the Calgary Stampede was pet cute donkeys so that doesn’t count. I freakin’ love donkeys.

The phrase ‘it’s not my first rodeo,’ has multiple meanings, and is sometimes invoked as a warning, as in: Do not even think of taking advantage of me jackass! It can also refer to ample sexual experience, usually muttered by a bitter meat sack who is miles away from those heady days of awkwardly eager virginity. However, I am approaching the idiomatic expression literally, and will shortly be describing my recent END_OF_DOCUMENT_TOKEN_TO_BE_REPLACED