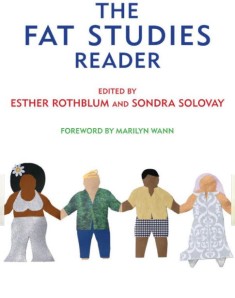 I first came across the Health at Every Size movement almost eight months ago, while in an anthropology class at the University of Alberta. My professor assigned Rothblum and Solovay’s The Fat Studies Reader as a required textbook, which immediately caught my attention; I had of course heard of gender studies, race studies, and queer studies, but fat studies? What, I wondered, could be said about fatness? Flipping through its pages, I found—amongst such titles as ‘Part-Time Fatso’ and ‘Jiggle in My Walk: The Iconic Power of the Big-Butt in American Pop Culture’—Deb Burgard’s article, ‘What is Health at Every Size?’ I did a double take—Health at Every Size? The name itself seemed to contradict every fat-is-unhealthy message I’d ever heard from friends, doctors, and politicians who ‘fight’ the ‘War on Obesity.’ These messages are so pervasive in our culture that they are accepted by most as unquestionable, as beyond repute, as so obvious that they don’t even need to be said—and yet they are said. They are insisted upon over, and over, and over again. Why?

This is perhaps the central question of fat studies. Why has fat been socially constructed as unhealthy, unattractive, and even immoral? And perhaps more importantly, how do these beliefs affect people’s lives?

Until eight months ago, these were questions that I honestly never considered. At 5 foot 8 inches and 145-ish pounds, my weight has never really been a major source of concern. Even after I graduated high school, gained the seemingly inevitable freshman 15 (or, in my case, 20) and my family doctor told me to lose weight with such contempt that I cried on the drive home, it still never occurred to me to question fat-hatred and anti-fat discrimination. I, like most thin people, suffered from—dare I say it?—‘the skinny girl’s burden.’ That is, because fat-discrimination does not directly affect my daily life, I never really thought about how it affects others. However, this anthropology class forced me to step back and carefully reconsider health and its relationship to body size. Over the next few months, I became an adherent to HAES, and here’s why:

The HAES model acknowledges a simple truth: bodies are not 100% under our control. If body size was entirely determined by diet and exercise, everyone who ate healthily and remained active would be slender, and everyone who does not would be larger. This is obviously not the case. We all know people who cannot attain the ‘ideal’ body no matter how hard they try, and others who are thin despite high caloric intakes and gross inactivity. Ah, genetic variability. Unfortunately, many of us seem to forget, ignore, or actively combat our genes, as the overwhelming social pressure to be thin leads millions of dieters to adopt extreme measures to lose weight. This is not a good idea. Numerous studies have shown that yo-yo dieting is actually more harmful to one’s health than maintaining a steady, larger BMI. HAES recognizes this and rejects weight loss as its central goal. Instead, it advocates healthy lifestyles—staying active, eating well, and taking care of ourselves on a daily basis. In HAES, a ‘healthy’ weight is not numerically calculated with pounds and inches, but is understood to be the weight that results from healthy behaviours, and varies enormously from person to person.

However, as Burgard points out, the scope of HAES is not limited to physical health, but also includes emotional and spiritual well-being. This is due, in part, to the movement’s historical roots. Fat advocacy is often traced back to the 1969 foundation of the National Association to Advance Fat Acceptance (NAAFA), which was the first of many organizations to recognize body size diversity and challenge anti-fat stereotypes. These groups not only questioned the health benefits of dieting (is a ‘starved fat person’ really as healthy as an ‘always-thin person’?), they also questioned the supposed health detriments of fat, suggesting that anti-fat stigma may have a greater negative impact on one’s health than fat itself.

This, to me, is a very provocative argument. Consider last week’s story of the ObGyn doctor who called his patient fat and unhealthy without conducting any tests or asking any questions about her lifestyle. What if she came in to his office not for a routine exam, but with a specific complaint? Would he follow due diligence and conduct all necessary tests to make an accurate diagnosis, or would he assume that her weight must be the cause of her discomfort? Sadly, studies have shown that this is often the case; anti-fat discrimination is rampant in clinical settings, and leads to fat patients often receiving sub-par health care. Such discrimination also discourages larger patients from seeking medical attention in the future—why expose oneself to such pain and humiliation unless it’s absolutely necessary?

HAES also considers how fat stigma affects health outside of the doctor’s office. Larger bodies have higher levels of un- and underemployment than thinner bodies, earn lower wages for equal work, and consequently are more likely to have lower socioeconomic statuses. This creates a vicious cycle, as lower income levels reduce access to high-nutrient foods and safe physical activities. So while HAES encourages individuals to eat their veggies and hit the gym, the movement also recognizes that this is not always possible for everyone, and aims to combat social barriers to health.

3. It applies to everyone.

Like last week’s blogger, I can’t stand it when people accuse HAES to be an excuse to be fat. HAES is a weight-neutral health paradigm. It doesn’t care what you weigh, only whether or not you can and do live healthily. It does not only apply to larger bodies, but ‘skinny-fat’ bodies as well—it applies to me.

Here is a brief history of my body. I was always a slender child, but I became quite athletic in junior high, when I started to dance at least 2 hours a day. After high school graduation, I quit ballet, discovered beer, and reached my weight zenith around age 20. I did eventually lose 15 pounds, resuming my 145 pound average, but not because I dieted or exercised, but simply because I moved out of undergraduate residence and stopped eating excessive amounts of poutine. With the exception of several short-lived bouts of fitness-mania, I had been almost completely inactive for 7 years. Although I was thin, I was not healthy. In March, however, I actually sought out the gym in my apartment building, and starting going 4-5 times a week. In May, I registered in ballet classes at my university. I started cooking more. Although I’m not sure I made the connection at the time, I think my exposure to fat studies and HAES seeped into my subconscious and motivated me to become active again. And although I haven’t lost any noticeable weight, I do feel a lot better!

Here I am in high school (on the right)

Me (on the right) during my first year of university.

Now, to those ‘skinny-fat’ people who argue that HAES is an excuse to stay fat, I would counter that, for you, the biomedical model of weight and health is an excuse to stay inactive. It’s all a matter of perspective. Doctors, friends, parents and politicians who equate thinness with health are not doing thin people any favours; in fact, thinness may function as a kind of veil concealing ill health. Health concerns should not therefore focus exclusively on large bodies, because a) many fat people are healthy, and b) many thin people are not. We all need to be encouraged to pursue health, regardless of size and without the impediment of judgement and discrimination.