Feminist Figure Girl: Look Hot While You Fight the Patriarchy

Even more appealing to me was the chance that my plan would fail, and that I would be unable to compete on stage. My literal failure was certain, for I could never win a figure competition, and would likely not even place in the top ten at an entry level contest. Yet I longed to experience the daily grind of lifting heavy weights and the discomfort of dieting. I wished to challenge my belief system in ways that had previously been unthinkable: by wearing a bikini in front of an audience, inviting male judges to evaluate the shape of my ass, and eating meat after a seventeen-year-long period of vegetarianism. Merely contemplating these acts terrified and repulsed me. I was nevertheless excited by the chance to enter, or at least be on the edges of, a bodybuilding subculture. I wanted to speak a new language about and learn a new way of seeing the human body. I was determined to push my body to its limits, studying how it responded when fuelled with animal protein and supplements. Most of all, I desired to experience and demonstrate the malleability of my body, instead of writing about the historical and cultural construction of other bodies.

Chapter One  Measuring Up: Comparing Bodybuilding, Weight Watchers, and Yoga

Unlike the ideally static Weight Watchers body, which achieves and then maintains a goal weight, the built body is unstable. It gets larger as it bulks up during the off season and then leans out before competitions. On one hand there is much to recommend this cyclical approach, for it recognizes that the body is always changing, and makes continual adjustments, while understanding food as a crucial part of physical existence rather than an indulgence. In contrast, Weight Watchers promotes the ideal of an impossibly stable body, apparently unaffected by aging, stress, hormonal cycles or injury, while framing food as a luxurious temptation that must be either resisted or earned. On the other hand, it is difficult to portray the built body as a ‘reasonable’ one, especially when considering the extreme conditioning sought by competitive bodybuilders, notably those in the light-, middle-, and heavyweight classes.

Chapter Two Embodiment and the Event of Muscle Failure

Merleau-Ponty’s theories have been taken up by feminist scholars because they can be expanded to explain gendered experiences of space and embodiment without essentializing male or female bodies, equating the body with material flesh, or erasing historical and cultural differences in bodily experience. Iris Marion Young draws on the concept of the body schema to argue that instead of experiencing the world in terms of ‘I can,’ that is, as oriented towards certain projects based on bodily capacities, women often experience an ‘I cannot’ inhibition of intentionality. While she highlights the restrained female body, I have already described how other scholars emphasize the opportunities that increasingly exist for women to live multiple kinds of bodies—freer bodies, they would contend—by undertaking assertive, expansive movements during such activities as mountain climbing. Yet as far as I know the concept of body schema has not been applied to research on bodybuilding, and certainly not to the pursuit of muscle failure. It is nevertheless useful, for my first experience of muscle failure created a sudden and unexpected disarticulation of my body which, though in a manner less drastic than amputation, disrupted my body schema. This disruption was initially shocking, but as my weight training and experience of muscle failure became habitual, my body schema recalibrated, ultimately changing my experience of space as well as my thought processes, scholarly research goals, and orientation to the world in general. In contrast to the values promoted in most if not all feminist versions of phenomenology, my altered body schema stemmed from the ‘I cannot’ experience of restraint and a rather passive lack of sensation, if not exactly from a thorough objectification of my body, which can never fully occur within the terms outlined by Merleau-Ponty. Still, my defining moment was anything but dynamic, and it shifted my attention to my body as a type of matter for which ‘not everything is possible.’

A substantial scholarly literature explores the communities built in relation to organized fitness activities, noting that different kinds of gyms—for instance those devoted to boxing or located in suburban areas—will foster distinctive cultures. New gyms are continually created to support specific demographics in today’s consumer culture. A chain called Downsize Fitness that recently opened in three American cities caters exclusively to clients with 50 or more pounds to lose. ‘Skinny’ people are not allowed to join. In the past, gyms committed to making clients feel comfortable have excluded male members. The North American chain Curves advertises ‘no men, no mirrors,’ reassuring those female patrons who fear being looked at and judged. This franchise also prefers to hire ‘average’ support staff, not educated trainers with visible musculature. Such specialized organizations reveal that certain groups, especially overweight or unfit women, have had negative experiences with exercise, realizing that gyms primarily function as sites of display rather than mutual support. The spatial dynamics of gyms can indeed have a profound impact on self-perception. In keeping with my previous discussion of how the space surrounding the Morgentaler clinic in Fredericton reshapes the identities of those who enter it, I have observed that exercisers who are of average size while at a cinema, shopping mall, or restaurant, are suddenly transformed into fat people when they enter a standard commercial gym. Surrounded by motivational posters, scales, and heart rate charts, as well as by a higher than average number of athletes, they can be seen and see themselves differently, becoming both disoriented and understandably resentful. As the active field of ‘fat studies’ is revealing, the categories of ‘fat’ and ‘fit’ are historically and culturally determined; they are also dependent on the vagaries of place.

This combination of signs of mutability with those of insistent materiality is crucial to Heather Cassils’ representation of trans identity. The artist uses bodybuilding to undermine categories that are usually opposed, bringing together male/female, masculine/feminine, nature/culture, and sex/gender to embrace multiplicity and ambiguity. In contemporary western culture, a body with visible musculature can send confusing and contradictory messages, a situation explored and arguably enjoyed by Cassils as well as Marcia Ian. While musculature remains for the most part coded as male or masculine, Ian contends that when muscles are exaggerated in size they become strangely un-gendered, enacting a ‘revenge against sex’ by turning each practitioner’s veiny, engorged body into something resembling a giant penis. On one hand, this transformation recognizes the inadequacy of the ‘natural’ penis, which does not deserve the privileges awarded to it. On the other hand, it allows subjects categorized as female to move into the male domain, potentially shedding the negative connotations of femininity. According to Ian, competitive female bodybuilders like her ‘strive to embody in their own disciplined flesh all the clichés of masculinism from the barbarous to the sublime. Female bodybuilders do this not because they want to be men, but because, like men, they want to eradicate from themselves their sentimentalized “femininity,” and its historical equivalent, immanent passivity.’ This debatable conception of the male-identified, phallic bodybuilder could shed some light on why the pin-up image of Cassils does not need to include either a fleshly appendage or an artificially removable one like that of Benglis. Yet Cassils’ muscularity is not so easily classified as phallic, for when certain viewers regard images of the artist’s inflated male body, they see the other, apparently competing signs of gender, like lipstick and bra tan-lines, and then look in confusion toward the crotch area to fix the subject’s identity. This search for definitive visual proof is continually thwarted by the representations of Cassils, a situation that can be experienced as pleasurable, intriguing, or frustrating, depending on the viewer’s inclinations.

Chapter Five Aftermath: The Photographs in My Purse

I did not become a future figure competitor until October 18, 2010. That is when I entered a small, dimly-lit consultation room with my current personal trainer, Audrey Shepherd, and removed my workout pants and t-shirt to reveal a pink 1950s bathing suit. Standing awkwardly against a cold wall, I handed Audrey my camera and she took pictures of me from the front, back, and both sides. I did not flex, pose, or try to suck in my gut. I was not tanned or wearing make-up and my hair was not done. The resulting pictures are hardly flattering, and lack any contextual markers, except for the weigh scale beside me, a potentially ironic allusion to the fat-loss diet program I would start three months later. Although this photographic event was in many ways banal, it conferred my identity as someone in training for a bodybuilding/figure competition. I was transformed by disrobing and posing as a body both deserving of and desiring scrutiny. This photographic act was also a disciplinary exercise that positioned me as an object waiting to be compared and contrasted with other bodies, recalling art historian John Tagg’s arguments about nineteenth-century photography as a state apparatus that participated in producing regimes of truth able to hold citizens in place. By submitting to these ‘before’ photographs, I had opened my body to the application of rules and regulations, while requiring viewers to look at me in a judgmental way. At the same time, the pictures were made within an atmosphere of trust, initially viewed only by myself and Audrey, creating an intimate bond between us. 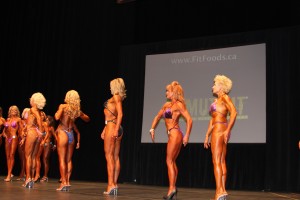 ‘Would numbers 11, 12, 13, and 14 come to the front of the stage, please? Now hit your front pose, ladies. Make one quarter turn to the side. And now to the back.’ As I tense my muscles and flare my lats, I reach up to sweep my heavy dyed blonde hair off my shoulders, employing a flourishing gesture that I have practiced over one hundred times. Suddenly the entire crowd lets out an audible gasp. My bra has fallen off, accidentally unhooked by the long gel nails welded to my hands. With lightening reflexes, I grab the front of my chest while clumsily attempting to re-hook the clasp behind my neck. I cannot manage it. The announcer eventually calls an assistant to the stage and she remedies the situation. I never stop smiling throughout the entire ordeal. After all, it is in many ways the perfect culmination of my Feminist Figure Girl research project.

The story of my ‘wardrobe malfunction’ encapsulates the main themes of this book, including references to vision, display, intervention, embodied experience, performance, posing, collaboration, audience feedback, and, most of all, the kind of failure that is enabling. The public revelation of my shrunken, dieted breasts was by no means planned. I need to confirm the fortuitous nature of this event because about a week before the show I had announced my desire to subvert it while on stage. Inspired by tales of feminist interventions at beauty pageants during the 1960s, I had threatened to shout empowering slogans while posing or else bend over to moon the judges. Yet when the day of the contest finally arrived, I was simply too tired to resist the competition’s script in a deliberate fashion. Luckily, it all worked out in the end.

1 thought on “Excerpts from My Forthcoming Book”