“I am now going to gather up the breast tissue from under your arm and push it onto the tray,” says Ana as she transforms my body into a scientific specimen. I am literally squeezed into place by the mammography machine, which feels smooth and cool as I lean in to embrace it. I look down in amazement at my right breast, now pancaked between two glass slides. At the same time, I am intellectually riveted, thinking about my relationship to technology and the Canadian health care system, especially my recent promotion to the age-related category considered “at risk” for breast cancer. “Don’t worry,” advises the petite Filipina woman as she raises the platform, forcing me to straighten my spine. “The machine is not too high, though sometimes people complain.” I smile and declare “Oh I’m sure you know what you are doing,” while glancing at the framed radiology degree on the wall. “Hold still,” Ana commands after shifting my shoulders and back into perfect position. I am a passive cyborg robot creature. “Okay you can move now,” Ana finally decides, as she regards the resulting digital picture. Then something surprising happens. “Oh my,” she gasps, “I have never seen anything like this before. Come and take a look.” Now, some people might be alarmed by such a pronouncement, but not me. I am optimistically certain that my breasts are fine. As usual, I am fearless until I have a fucking good reason to be afraid. I excitedly scurry over to Ana’s screen, eager to see medical imaging technology in action. “It is just beautiful,” she notes, describing my image as “a textbook case” while tracing the distinct outline of my clear breast with her finger, lingering on the prominent pectoral muscle. “Do you mean that the development of my underlying chest muscle is unusual?” I ask. “Surely you have had other muscular women in here before?” Apparently not. I beam with pride. This process is repeated for each of the next three x-rays, creating a sudden friendship between us. I contemplate inviting Ana over for Mexican pulled pork tortilla wraps. I bet she would like that. “Thanks Ana,” I say on my way out, filled with endorphin-joy from the physical effort of this rather intense process. “No, I should thank you,” she beams, “for giving me these beautiful images.”

It is only later that I wonder what she plans to do with the pictures that she has characterized as gifts. Are they really hers? Will she sell the admittedly gorgeous breast scans online? Should I proclaim some kind of legal right to the products of my own body before that happens? Or will my mammograms instead be used in a textbook, accompanied by the lively caption: “feast your eyes on these perfectly healthy tits.” Maybe Ana will put my mammary glands into her teaching file, showing them to hundreds—nay thousands—of admiring students. I know that the CAT scans of my deformed feet were used in this fashion by an orthopedic surgeon in Fredericton who clapped his hands with glee after seeing the rare form of bony fusion. Thanks for nothing jackass! But I digress, so back to my tits: if they are really so great, I should probably be making hay while the sun shines. Would anyone pay cash money to see them online? Would I get fired from my job for pimping out said jubblies by means of a web cam? Would Sony Pictures buy the rights to my thrilling life story after the ensuing lawsuit was settled? 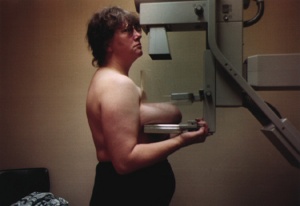 Contemporary artist Jo Spence refused passivity during her mammogram by producing her own pictures of the process (from her series The Picture of Health? 1982-86)

“Sorry to interrupt your ridiculous spin cycle, FFG,” I imagine my incomparably delightful readers thinking, “but what has all this got to do with body shame, the topic promised in the title of this post? It sounds like more of your usual body bragging and showing off.” Well hold on, my little gingersnaps, because I am getting there. Mind if I continue? Gee thanks. … While I was looking at the images with Ana, I did not bother to hike my flimsy hospital robe over my breasts. They were just out there in all of their glory. “You can cover yourself now,” said Ana, clearly disapproving of my shamelessness. I did not comply, but was reminded of a similar experience a week earlier when I was at the doctor’s office for my pap test. After the procedure was finished—as usual I discussed recent travel experiences with my engaging doctor while she rummaged about with my cervix—I simply hopped off the table and stepped into my thong. Am I really supposed to sit trembling beneath a paper apron until the doctor leaves the room? In my opinion it is silly to feign modesty before a person who has just removed her hand from my vagina. Anyway, while receiving instructions in proper bodily decorum from Ana I realized that I had (at least) twice in recent memory failed to perform body shame. It made me ask the following questions: How do people learn body shame? And how do some people avoid those lessons, or at least manage to unlearn them?

I have not arrived at a singular answer, but have been thinking about the multiple repeated admonitions that toddlers receive—put that away; no one wants to look at that!—as well as traumatic incidences of high school gym class shortings, among other events. It all adds up, slowly but surely to produce naughty zones and ugly parts, flat asses and skinny calves. I am always puzzled when women at my gym decide to change in the bathroom stalls—and annoyed when I am lined up, waiting to go pee—or cringe behind locker doors while sliding out of their clammy lulus. To my knowledge, no one is looking at and judging them. I know this is a dream but I fantasize that the ladies’ locker room is a last bastion of freedom from norms and ideals, where cellulite is standard and backne is typical. In any case, we owe it to ourselves and our sisters of all genders to strip unashamedly and honestly, using our vulnerably imperfect flesh to resist the otherwise overwhelmingly oppressive beauty culture. Now don’t get me wrong. I am not advocating that you flash your 70s porno bush around the premises, thereby burning out the eyes of those younger close-shaved ladies [yes this one is for you GlamPro. Enjoy]. Nor do I recommend that you flop your expansively moist ass onto the small black wooden stools so thoughtfully provided by the management. Instead, I long for a world in which you would bare that ass in a rather more hygienic fashion but with a sense of pride. I look forward to the day when I can lead the cheer for C-section Fridays. Are you with me? [Aside: Clearly I am being willfully naive here, ignoring all of the good reasons people might change privately or be embarrassed by their bare ass. I have uploaded the book called Fat Shame and will soon be reporting on it but also look forward to all of your own thoughts on this issue]. 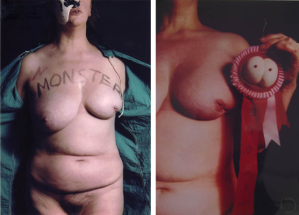 As I was hosting a dinner party the other evening—by the way it was a gastronomic triumph—our conversation naturally turned to the locker room. One of my lovely guests was discussing how much he hated swimming at the public pool because the change room inevitably revealed what he called “a row of cock.” “Ugh that is so disgusting,” the strapping young man declared. I could not help but pipe up: “I see lots of lady parts in the locker room and it doesn’t bother me.” “That is different,” he affirmed, “because unlike the female body the male body is hideous, without exception.” Every female and male diner agreed with this statement, except for me. I was the only one who stuck up for cock, not to mention the always adorable man belly. I also happen to like a nice hairy back. That’s right. You heard me correctly. I said it. This discussion quickly spiraled me into a state of moral outrage. Raising my fist in anger, I climbed onto the soap box that I keep in the living room: “Let us affirm the love of all flesh without discrimination,” I cried, passing around a petition to that effect. Sadly, no one would agree to sign it. So I stepped back down and served up some black bean chocolate cake.

As I was noisily getting ready to head off to teach my spin class this morning, my still-in-bed man partner awoke from his slumber, smacking his lips and scratching his belly. “Do you ever experience body shame?” I inquired. “What?” he replied in a raspy morning voice while blinking in confusion. “No. Never. What does that even mean?” I suspect that shame regulations are applied less forcefully to bodies that are visibly male, but remain open to correction. My attention to gendered differences has been supported, however, by various HBO comedy specials, including one in which Louis C. K. gleefully announces that his chubby groin and upper thigh area resembles “a pig’s ass” and another in which Jim Gaffigan proudly brags about eating at McDonalds and getting justifiably fat. [Aside: I just noticed that he has written a new book called Dad is Fat, though he certainly doesn’t look very fat on its cover]. But maybe these confident and ultimately body proud men are unusual? I doubt that my LSP is the best example of contemporary masculinity, for he is unwaveringly self-assured in every situation, whether trudging away on the elliptical machine I now force him to use at least twice a week, competitively trying to beat my 10-year-old Little Sister at Dance Dance Revolution, or enacting Stuart McLean’s voice to recite Missy Elliott song lyrics. “I would like you…to get up….into my spaghetti.” If you are a Canadian lover of CBC radio, you know that this imitation mash-up is fucking hilarious. But even if you have no idea who Stuart McLean is, you should know that my LSP has got a lot of spaghetti. And he is just fine with that. So how do you feel about showing off your own pasta bowl?