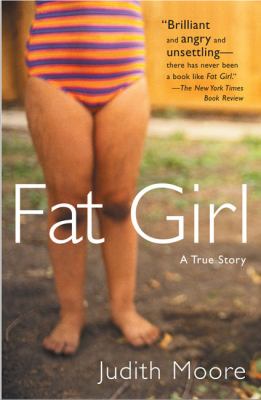 In a memoir called Fat Girl: A True Story (2005), author Judith Moore concludes “I am ashamed and I am resigned to my shame.” It is hard to blame Moore for failing to take pride in her fat body. Large bodies have been associated with inferior, primitive qualities, and considered to be unproductive, undisciplined, and weak for a very long time. Amy Farrell dates the rise of fat phobia to the end of the nineteenth century, when an emphasis on industrial efficiency made fat bodies seem wasteful, undermining their previous status as alluring signifiers of wealth (Fat Shame: Stigma and the Fat Body in American Culture, 2011). But Farrell may be romanticizing the early modern period, for even during the fifteenth and sixteenth century medical publications regularly linked health with moderate eating and body size, while religious dogma condemned the sin of gluttony. Corpulent “Rubenesque” bodies were used as allegories to convey political meanings in paintings made for wealthy clients. These chubby ladies did not represent the ideal female form, much as we might wish for a fat-loving past that never really was.

Fat activists strive for the dawn of a new era. In FAT!SO? Because You Don’t Have to Apologize for Your Size! (1998) Marilyn Wann encourages readers to “practice saying the word fat until it is the same as short, tall, thin, young, or old. . . . . Let friends in on your secret. Say, ‘By the way, I’m fat.’” Basically, she urges people to come “out” as fat in order to quit hiding and instead embrace their “flabulousness.” She includes pictures of fat bodies throughout her text, calling them “anatomy lessons” and offering them as a form of resistance to the mass media embrace of thin bodies. Well these days fat bodies are continually visible in the media, but are confined to particular roles: as the “before” picture in diet ads or biggest loser shows, the anonymous person in news clips about the “obesity epidemic,” or the comedic figure in popular films. I applaud Wann’s efforts toward fat empowerment and think that they should be extended to all non-conformist bodies, which would pretty much include every single body. Don’t worry. I would never claim that body shame is shared equally, or that a thin white woman could be as oppressed as a flabulous lady of colour. That would be as ridiculous as ignoring hundreds of years of historical and structural inequality to denounce “reverse racism” or “reverse sexism” as a few privileged and sadly uneducated white men and women are wont to do. All the same, body shame is experienced to varying degrees by many people, who might be less fat phobic—here I include myself as someone in need of reform—if they could recognize and celebrate their own difference.

To that end, I invited friends, colleagues, and FFG readers to submit pictures of their favourite non-overtly-sexualized body parts. Feel free to send more in response to this post, including them with a comment or on my FFG facebook page. Here goes, in the order in which I received them:

The impressive hands and tapering lady fingers of Babyeaterlifts. Eat your heart out Pontormo! Don’t be fooled; as you know from her guest post called “Gorilla Hands,” these seemingly delicate appendages enable her to lift extremely heavy weights, like (as PDDs would say) a boss.

Did you miss me? I thought so. Here is a picture of my unlady-like leg, shot by PDDs at the gym, right after shoulder day, which explains why my pin is not particularly pumped. I nevertheless enjoy this image of my stumpy stump because it looks like a giant hamhock. I imagine King Henry VIII roasting it over an open fire, taking a swig of coarse ale and then chowing down. I never deliberately train my calves, but teaching spin classes has made my lower legs ever bigger, with some unfortunate results. Hey RenMan, remember when I burst the thick zippers out of my sturdy poker boots after working out with you at the gym? We huffed and we puffed with all our might, but could not get those Fluevogs back together again. Now I have to wear half-price stretchy riding boots from The Bay. Sigh. I am including another photo to show my strangely enlarged tibialis anterior, something that I chalk up to the bony fusion in my feet. My theory is that the lack of flexibility in my flippers forces my lower legs to work hard all the time. Oh how I relish this abnormality.

As Dick Valentine of Electric Six would say: “oooh baby!”

Check it out! PDDs is now training and dieting for her first figure show, like a boss. While my adorable work out partner has many fine features, her claim to fame is a lovely set of abs adorning a long, lean torso. I must compliment her on including several layers of self- reflexivity within this shot, namely the presence of the camera phone and mirror. Visual culture theorists everywhere applaud you, PDDs. And I will soon be cheering while you strut on stage, before I dash behind the scenes to deliver an emergency bag of yogurt-covered almonds and gluten-free cheesecake.

“Where are all the boys?” you might be wondering. Yeah me too. Disappointment. Since I make a habit of revealing personal details about my LSP without his permission, I can at least describe his genetically beautiful man rump, which is like a bundt cake you could ice and serve to four. I cannot help but feel cheated, since my (finally) rounder butt was produced by 10,000 hack squats, 20,000 front squats, and ten years on the step mill. In contrast, his just grew that way, as if he picked it off the jello tree in the backyard. Don’t even get me started about his gorgeously long eyelashes, which he actually has to trim so that they do not brush up against his glasses in an annoying fashion. Think Snuffelupagus. And while you are doing that I will be out comparison shopping for Latisse.

Wait there is a boy! You may now feast your eyes on his many praise worthy man parts. It’s a bird; it’s a plane; no, it’s Guest Poser, posing for you with just over a month left before his next bodybuilding show. It was hard to choose his best features, but I selected the quads because they are especially impressive. And I love the second “arms akimbo” shot because it reminds me of 1) Superman, and 2) a 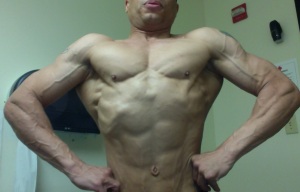 I recently saw the costumed Halberdier pictured above purchasing Mennon speed stick and a pair of those scratchy loofah gloves at my local Shoppers Drug Mart. I briefly considered following him to find the white rabbit, but it was a school night.

I will end with the most touching submission to this favourite body parts post. It is from Julia (I am not sure whether she would want me to include her last name) and I will simply paste her words beside the photographs that she sent me, labelled “Big Ol’ Hands.”

“I would like to share with you my hands; more specifically my right hand and the muscle just to the right of my thumb. I photographed it au natural but if I’ve done a weight work out or any kind of labor it nearly doubles plus some veins stick out on it! I like to show it off at parties… No one has anything like it. Believe it or not… ‘The Muscle’ has actually decreased in size over the past few years, since I don’t do as much physical labor as I used to. I always tell people I have the hands of a Romanian wrestler (actually I’m Russian) and when they don’t believe me we compare. My hands win, almost always. When I was 28 I had my grip strength tested and I scored in the 90th percentile. For men.

I started welding in highschool when I was 16. When I was 18 I started as an apprentice and became a journeyman when I was 21. I worked as a welder full time until I was 30. 14 years of daily hand work outs is a lot! I suppose they are somewhat disproportionate to my body.  I’m 5’9, 145 lbs and a size 6. People usually peg me at 125lbs; they don’t know how much muscle weighs.  I’m long limbed so I think they fit me pretty well.

bone. You get the picture… I love my hands. They are burned and scarred, arthritic and swollen and some of my fingernails will never grow right again. My hands are incredibly strong but still infinitely sensitive.  They speak to each other. One holds material gauging true, the other taps the hammer, patient. I hope you like my hands.  I think they’re great.”

Now that’s my kind of celebration.