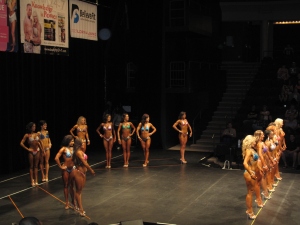 Overall view of the Maclab Theatre in downtown Edmonton, with the Figure Medium class on stage (Fitbabe is at the back, second from the left). All photos courtesy of FFG’s crappy camera.

On Saturday June 01, I finished up my cardio and headed over to the Northern Alberta Bodybuilding Championships to watch PDDs and Fitbabe compete in Figure. Both ladies did really well and—get ready to cheer along with me—both placed in the top 5 of their respective classes, which means that they can continue in higher-level competitions should they wish. I went to see the morning show because that is when the judging actually takes place, and most friends and family attend the more spectacular evening show to hear the prizes announced. As the girls were getting first call outs that night, I was at home, baking up cheese cakes for PDDs, and chilling some olives and white wine for Fitbabe. The placings mattered little to me for I was already proud of them, knowing how hard they had worked, as well as some of the many obstacles they had encountered and overcome along with way. I have to admit that I almost cried with happiness when they were posing onstage, something rather unusual for a non-emotionally demonstrative person like myself. 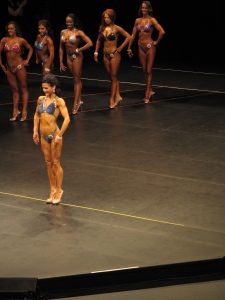 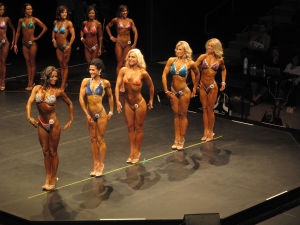 Fitbabe in line, second from the left. 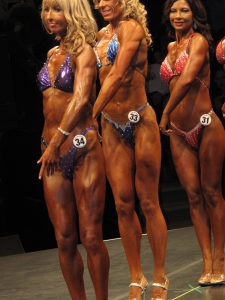 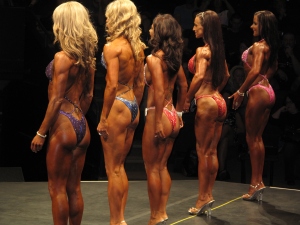 My experiences of shouting, snapping amateur photos, and celebrating on Saturday encouraged me to reflect back on my own competition, which I was shocked to realize was a full two years ago. Has my life changed as a result of that experience? Well, in most ways no, but in some ways yes. In order to explain, I have created an unscientific numerical list of the lasting changes:

1) My relationship with food is different. Before the show I was a carb-loving vegetarian, but now I am a giant meat whore. I still eat clean about 90% of the time, having six small meals of balanced protein and carbs throughout the day, including oatmeal, protein powder, chicken, and beef. I am not very concerned with measuring anymore, however, which means that I now overeat healthy food rather than crap food, something of an improvement. When I announced my competition-as-research plan, a few people warned me that I might develop an eating disorder as a result, taking drastic measures to maintain a lean body. That did not happen to me, perhaps because of my academic approach to becoming a figure girl. In the end, my foodie identity was reinforced, giving me a renewed appreciation of diverse dishes, textures, and flavour combinations. Still, there are a few things that I will no longer eat, including anything deep fried, nacho chips, pasta, and pizza, because they are just not fucking worth it to me. Now that I know a bit more about what such food does to my particular body, I cannot go back to my carb-heavy, cheese-loving days. Ever.

2) I love and trust my body more than I did before. I pay more attention to what it is telling me. In short, I have learned to listen to it. According to Keith Morton: “Most people, whether they believe it or not, have never taken a moment to sincerely listen to another human being.” I could not agree more, Keith. To take that idea one step further: most people have never sincerely listened to their bodies either, or they would not be filling them with nutrition-free garbage while remaining in a seated position most of the time. I learned that my body is pretty amazing in some ways—it will lean out when I treat it right, has amazing stores of energy, and some surprising abilities that will soon be revealed—but it also has limits, notably rather painful bony fusion in both feet, and an intolerance for delicious fresh melon. I now recognize and accept these and other limitations.

3) I am more attentive to my appearance and generally more vain than I was before hitting the stage. I regularly have facials, get my nails done, and pay top dollar to have deep conditioning treatments applied to my long (now dark again) hair. This transformation is expensive and arguably far from positive, except for those who get to gaze fondly at my desperate attempts at youthful loveliness. I should really start charging a fee, especially to those Saturday morning gym creepers.

4) I now have keenly developed visual skills, which render me able to discern a fit from an unfit body, something that is not dependent on size or amounts of fatty tissue. Recently a rather large woman began taking my spin class, but I could tell from her posture, effort, and expression that she was already quite fit and able to handle the drills. In contrast, the skinny guy beside her had me worried, and not only because of his too-snug-in-the-basket-area riding shorts. His huffing, sweating, poor technique, and lack of core strength had me rehearsing the latest CPR protocols in my head. Of course, he failed to heed my repeated cautions and advice. One dark side to this ability: I become enraged when (mostly non-fitness) people fail to recognize that I am fitter and stronger now than when I was onstage two years ago. “Oh did you lose all your muscle?” asked a skinny-fat professor lady. “No,” was my angry reply, “I am much more muscular now, but I am also fatter. Thanks for noticing.” Q: Why do I even give a flying fuck what she or anyone else thinks? A: Please see point number 3 above.

5) My ass is much bigger, better, and rounder than when I was on stage, a result of repeated ass cardio and heavy squats for the past two years. Now that is a great use of my time, don’t you think? Please see point number 3 above.

When all is said and done, my core identity remained unchanged after I hobbled off stage two years ago because I am first and foremost a scholar. I love to learn, read, do research, and write books. For me, getting a PhD and writing three books were a million times harder than training for and competing in a figure show. That statement is not meant to undermine the massive accomplishment of anyone who has competed at any level. But that fact is probably why the competition experience did not fuck with my head too much. In the end, I am more brain- than body-centred, even as I recognize that this distinction is false. I would love to hear feedback from others who have competed, especially Guest Poser, Fitbabe, and PDDs. How did competing in a bodybuilding, figure, or fitness show change your life for better and/or worse?

17 thoughts on “How Doing a Figure Show Changed My Life, Slightly”