Bags are unloaded directly onto the tarmac in Fort Chipewyan.

I am sitting on a tiny plane bound for Fort Chipewyan, Alberta, admiring the letter that Alexandre Laviolette wrote to the police authority in 1897, indicating that his people would not stand for any infringement on their hunting and fishing rights. “I think myself a man same as you, and I would not step back for your gun.” He fearlessly defended his way of life, stating plainly that his version of freedom would not be taken away. “We don’t care how miserable we are in this country,” he asserted, recognizing the dangerous results when one group intervenes to “improve” the lives of another according to its own standards. Clearly, Laviolette’s definitions of both freedom and misery were historically, culturally, and geographically specific.

Fort McMurray in all of its glory.

I am visiting Fort McMurray and Fort Chip—very different places located in Northern Alberta—in order to research their respective museums. Yet I find myself continually pondering the concept of freedom instead. The first time this vague and shifting idea crosses my mind, I am sitting at the Humpty’s attached to the Super 8 Motel in which I am staying in Fort Mac. Trust me, I was lucky to get any accommodations in this still-relatively-booming oil sands industrial town, and the workout room at the Super 8 is surprisingly good. I am trying to choose the least unhealthy item on the menu, and finally select a spinach salad with grilled chicken, dressing on the side. As I wait for this delectably wilted dish to be delivered, I cannot help but overhear the three loud and large women at the table beside mine. “So, he says, you look like you would be wild at a party when drunk!” They all laugh, pushing back plates of cheese nachos before ordering milk shakes; one has vanilla, one strawberry, and one chocolate. As I rack my brain to remember what a milk shake tastes like—I mean one made with milk and ice cream instead of a scoop of whey isolate, 4 ice cubes, and a cup of 30 calorie unsweetened almond milk—I notice how happy these women seem. All of them wear short skirts and skimpy tank tops that reveal rather than conceal their multiple rolls of fat. I do believe that I am witnessing fat positivity, otherwise known as fat power, in action. It probably doesn’t hurt that men outnumber women ten-to-one in this macho oil town. Perhaps these statistics allow straight or bi women some relief from oppressive beauty norms. Maybe the women in Fort Mac are freer than the rest of us?

I realize that I am simplifying things, for being fat, along with most other aspects of our physical appearance, is not a straightforward matter of choice. Nor is it empowering for everyone, though it clearly is for some. After I leave Fort Mac and fly further north to Fort Chipewyan, the most important fur trading centre in North America during the nineteenth century, I am equally struck by the high number of people who would be classified as overweight or obese according to BMI norms and medicalizing statistics. In this case, however, I find it a little more comprehensible, for despite raiding the Super 8 breakfast buffet for packets of instant oatmeal and small containers of peanut butter, I quickly run out of food. Anything healthy is hard to come by, not to mention outrageously expensive. Pay $8.00 for yogurt? $10.00 for a small box of flax granola? I think not. At first I mix cream of wheat with the protein powder I brought with me from Edmonton, but I soon find myself taking a trip down white trash memory lane, heading back to my childhood by consuming baked from frozen french fries, boiled from frozen mixed vegetables, canned Irish stew, and Campbell’s chicken and stars soup with a sprinkling of crushed Premium crackers on top. [Aside: no, not the whole wheat ones]. I revel in mediocrity, finding it magically delicious. I am home. I feel free(ish).

That is probably why I am strangely relaxed in Fort Chip, a place that is simultaneously beautiful and impoverished. The gregarious Cree host at my B and B describes it as a “welfare town,” and hardship is indeed evident. Still, poor people don’t really scare me, and I don’t imagine that they form some kind of homogeneous group. I instead imagine that I understand them in their mysterious diversity, while realizing that it would be ludicrous for me to think that my upbringing in urban Ontario could ever compare with that of an Aboriginal reserve life, shaped by centuries of racism. All the same, the many kids here seem joyous. They roam free in the streets along with unleashed dogs, from wolf size to miniature poodlish. I see six-year-olds rip by on motorized mini bikes, followed by pre-teen girls riding quads that kick up clouds of dust behind them. I have to admit that I feel a little envious. When my host asks me if I would like to take one of his trucks out for a spin, I ashamedly confess that I have never learned how to drive. He and his friends are incredulous. I don’t blame them. It is visibly clear that road and water transportation are linked with freedom in their lives, just as air travel is inseparable from my own version of the concept. 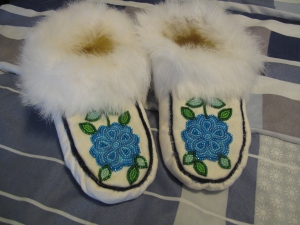 Moccasins made by Cookie Simpson of Fort Chipewyan. I bought them at the Bicentennial Museum gift shop. They smell like sweet grass.

Actually, for me freedom is primarily exercised by choosing with whom I will spend my time. Even this decision is not entirely a free choice, as my sage housemate in grad school once pointed out. According to him, people tend to recreate family dynamics in their various relationships, which explains why I got along so well with male roomies; I was reenacting my friendship with my younger brother. What do you think of this idea, my insightful readers? I find that it has explanatory value. For some people, however, this tendency towards the familiar can shape their lives in negative ways, especially if they attempt to recapture roles played or desired during childhood, like “heroic saviour of vulnerable and abandoned women,” or “caregiver to difficult and aloof men,” and so forth. To my mind, the partners and friends we select reveal much about who we really are and what we expect from life. I take friendship very seriously, devoting time to those who are loyal and interesting, making sacrifices for them. I am always baffled by people who seem to have only short-term or superficial friendships, or who have no friends at all, and instead move from one co-dependent and stifling relationship to the next. Perhaps that is their childhood version of “what feels right” or “what feels like freedom”? In any case, I am obviously in a rambling and reflective mood right now, thinking a lot about how people cultivate their futures, what our options truly are, and what it means to be a privileged white lady in a small northern Aboriginal town.