I took four at-home pregnancy tests on May 31, 2013 but was not entirely convinced by the evidence…

I counted to five while urinating and then waited the required minutes before looking at the pee-soaked stick. WTF? I could not believe my eyes: two solid blue lines. I felt a surge of pride: “Body, you rock,” I said aloud, though no one else was home. I simply could not believe that my almost 46-year-old flesh had defied the odds and (apparently) become pregnant. I had recently read online that women aged 45 had a 0.01% chance of conceiving WITH fertility drugs, and I was most definitely not using any such drugs nor in any way trying to get pregnant. Yes, I was having lots of sex with my adorable, fun-loving LSP (while carelessly using cheap and clearly faulty contraceptive devices). No, I was not interested in procreating. Although certain judgmental types insist that women who engage in sexual activity are necessarily responsible for any resulting pregnancy, they are wrong. Like the old pro-choice saying goes: “Just because you go swimming, doesn’t mean that you want to drown.” I knew that I had a choice to make.

Later that day, I carried a pink pee stick into the bedroom where my LSP was lying down, something he likes to do on a regular basis. “You are not shooting blanks!” I shouted, complimenting his triumphant manhood. Gazing at the fragrant wand before him, my partner promptly removed his sock and vomited into it. I could not really blame him. After all, we had long ago decided not to have children, and had repeatedly reconfirmed this conviction in adult conversations often held in expensive restaurants. In fact, I had affirmed that I would have an abortion should I ever get pregnant, as I am completely pro-choice and have no moral issues with this course of action. In contrast, I take umbrage at the idea that women should be legally forced to harbour and nourish a fetus inside their bodies against their will for a full 40 weeks, before painfully giving birth and potentially suffering complications from which they might never entirely recover. This scenario would be a fucking outrageous crime against humanity, and my government will attempt to pass any such draconian misogynist law over my dead body. I mean that literally.

Yet here I was at age 45, happy as a clam to be knocked up. I did not necessarily think that a baby would result. After all, the entirely reliable statistics that I consulted online indicated that some 75% of women my age had miscarriages. Still, I was as curious as hell about the situation, viewing my body as a kind of science fair project. “What will it feel like to remain pregnant?,” I wondered. “Could I actually get a full year off of work?” The answer to the latter question proved to be no, yet I remained eager to undergo the full medicalization of contemporary Canadian pregnancy. After all, this would be my only chance to have an utterly horrible and entirely amazing physical experience. I was game. “Bring it!” I declared, while my LSP emptied his stomach contents for a second time.

Then the fun really began. My hormone levels were initially quite low, and my family physician warned me that I might be having a chemical pregnancy rather than a real pregnancy that would implant and develop. She immediately adopted a skeptical position, which I appreciated. Multiple blood tests ensued, and as my numbers started to double again and again, things got slightly more concrete. My physician then strove to find an obstetrician for me. This proved difficult, for none of them wanted to accept my “high risk” case. “Oh how fascinating,” I said to her. “Are they unwilling to accept me as a patient because my pregnancy might be difficult and affect their statistics?” “Well yes,” she admitted. “So am I classified as high risk solely because of age, or are all older pregnant women deemed risky because many have developed such conditions as diabetes, hypertension, obesity, and mental illness?” “It’s the latter,” she concurred. “In that case,” I continued, “I am not high risk at all, since I am completely healthy and have none of those or any other complications.” “You are still high risk,” she said, “because your eggs are old.” I then pictured a carton of rotting eggs inside my wrinkly aged ovaries and was forced to agree that they were unlikely to produce a normal fetus. Not to mention the age of my partner—which no doctor has ever mentioned—for at age 46 he might be making new sperm all the time, but it was also potentially damaged by decades of living with pesticides, chemicals, and god knows what else in our environment. “Okay,” I concluded, “if I don’t eventually have a miscarriage, I will likely have to have an abortion when I discover that the fetus has congenital or chromosomal abnormalities.” This time my physician said nothing. As I was leaving, she piped up, advising me to stop working out [yes that was my question to Fitbabe the other week], but I staunchly refused to comply. Nor did I plan to cease consuming spicy food, sushi, seafood, delicious products filled with raw eggs, or soft cheese. “It’s survival of the fittest, bitch,” I shouted in the general direction of my already swollen uterine zone. 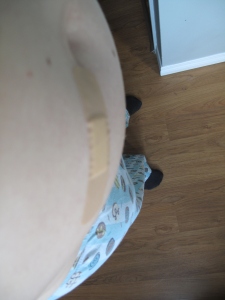 I was lucky to have a highly skilled and delightful young obstetrician accept me as a patient. “Are you excited?” he asked. “No,” I admitted. “I am not going to invest in this pregnancy until I have all of the tests possible. Please book everything for me.” Dr. Socks-and-Sandals did not want to schedule the amniocentesis, in case my nuchal transparency fold test went well—something conducted during an ultrasound— decreasing my risk of having a child with Down syndrome. I nevertheless insisted. Here I must admit something: I actually wanted to have an amnio, not just to obtain the most accurate information possible, but because I longed to know what it would feel like. I wanted to perceive a long needle pierce my skin, fat cells, and uterine wall to remove amniotic fluid for chromosomal testing. I wanted to be surrounded by a host of medical professionals and then wait for the results. In short, I relished experiencing the full and glorious effects of biomedicalization. Does that make me a weirdo? Probably.

I am now 19 weeks pregnant and my very active male fetus has recently been deemed “normal” by the medical establishment. It’s full steam ahead for me. I want to assure you, loyal readers, that Feminist Figure Girl is not going to transform into a pregnancy blog site. Nor will I wallow in maternal anecdotes or bombard you with photos of my spawn, should he arrive intact. I am determined to thwart the currently oppressive western culture of pregnancy, birth, and childhood—already described by my good friend Hissy Fit—and (most of all) avoid being a helicopter parent who produces a spoiled, consumer-driven, privileged asshole child. In any case, now that I have revealed my secret, you will understand why I have been blogging a little bit less during the past few busy months, also filled with research trips, writing, Global Nerd Nite, and a ton of working out. I should warn you, however, that my next post is called “Vaginal Overshare,” and it does refer to my pregnant state, though in a way that I hope is funny and more than a little rude.

11 thoughts on “FFG Gets Knocked Up”