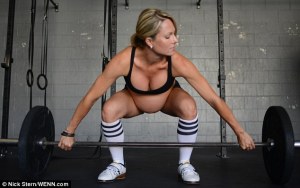 This image went viral last week, receiving about 20,000 comments, many of them negative.

Photographs of Lea-Ann Ellison, an American CrossFit enthusiast, recently attracted global media attention. A reader sent me a link to the story, asking for commentary, and I am happy to oblige. While I do not want to blather on about pregnancy, especially since I am currently six-months preggo, I think that gestation is not the only issue in these images. [To read more about Ellison see: http://www.dailymail.co.uk/femail/article-2425461/Mother-causes-social-media-storm-posting-pictures-weightlifting-EIGHT-months-pregnant.html#ixzz2golzfx5u]. Ellison posted photos of herself lifting weights when she was two weeks away from giving birth. Many commentators praised the 35-year-old mother of two’s high level of fitness, but others decried her activities as selfish, arguing that she was recklessly endangering the health of her fetus.

First let’s get the most obvious questions out of the way: should Ellison be lifting heavy weights during the third trimester of pregnancy? Medical experts consistently say that such exercise is not a problem; if a pregnant woman has regularly undertaken strenuous physical activity, she can continue to do so, as long as she feels good. It’s her body and she is the best judge of both its capacities and sensations. Many of the negative comments about Ellison’s fitness regime were from people who are not particularly fit and/or do not have an in-depth knowledge of physiology, much less pregnancy. Would I lift such weights while pregnant? Am I doing so now? Well, I have worked out almost every day since becoming pregnant, likely at a level that is more intense than that of the “average” person (whoever that may be). I lifted heavy weights until a few months ago, but have since cut down on my numbers. The other day, for instance, I used 40-pound dumbbells when doing single arm rows for my back, whereas I would normally pull something like 55-60 pounds per side. I felt completely fine, with no strain in my abdomen or anywhere else. In fact, I was slightly annoyed by how easy this activity was, so I can sympathize with Ellison. She is in amazing shape—far better than me—and should not have to sacrifice her hard-won fitness level because she happens to be pregnant. That said, I would never do what she is doing, simply because I am not trained in CrossFit movements. Ellison has a good, solid technique while doing thrusters, a motion that I have not performed. I will have to try it out with the guidance of an expert during my post-partum days.

Saintly S and M has sadly been censored.

Quite a few of Ellison’s critics emphasized the potential dangers of the images themselves instead of focusing on her as an individual. “These pictures will encourage other pregnant women to lift heavy weights when they should not be doing so!” Now things are getting more interesting for an art historian like me. As someone highly trained in the history of visual culture, I am intrigued by the argument that images are able to impact behaviour. Although it is not a particularly new idea, it does say a lot about our contemporary belief systems, particularly with regard to gender. Those who decry the potential impact of Ellison’s photos take up a standard historical stance when they imagine pregnant women as a vulnerable audience, unable to think and reason. Let us harken back to the sixteenth century: In 1541, authorities unveiled Michelangelo’s Last Judgment in the Sistine Chapel, a fresco painting featuring some 400 nude, writhing bodies. At the time, critics worried that women and children would be damaged by the sight of glistening genitals and buttocks, but assumed that educated men would be able to handle such material without ill effect. [Aside: Hee!]. Okay, so maybe Michelangelo went a little too far when he portrayed a naked Saint Catherine about the get bum-fucked by a hammer-wielding Saint Blaise. But would this image really make ladies and kids—God forbid, even ladies pregnant with kids—immediately bend over to take their punishment? I doubt it. Unfortunately, we will never really know, for church leaders had all the naughty bits covered up and these saints are now wearing robes, while Saint Blaise conveniently looks away from his submissive companion. I think you get the point. When those who attack Ellison worry about the negative impact of her images they continue to insist that some groups are in need of “manly” protection from their own bad judgment. I say fuck that. Few if any women who have never lifted weights will glimpse images online and then blindly try out the moves demonstrated by Ellison. Pregnancy does not lower your IQ; rumour has it that a pregnant woman is actually more intelligent than ever before, at least that’s what RenMan told me. Who am I to disagree?

This image of Lisa Lyon probably makes you want to stand naked on a hilltop while flexing your guns. Viewer discretion is therefore advised!

The critics of Ellison furthermore presume that her photographs convey one single and obvious meaning, namely that “Lifting heavy weights is the bomb and everyone should do it right now!” However, instead of approaching the pics of this fine and fertile lady as advertisements in a fitness magazine, I would like to take a step back and consider them more broadly. When I first saw the digital photographs of Ellison, I was reminded of the work of American photographer Robert Mapplethorpe, especially his pictures of bodybuilding champion Lisa Lyon, produced between 1980 and 1981. He is famous for his highly aestheticized images of many beautiful bodies, including those of gorgeous black men (see below). Although the Cincinnati Contemporary Arts Center and its director were charged in 1990 with obscenity for exhibiting a series of Mapplethorpe’s photographs, his work was legally declared art, not pornography. So there conservative knobs! 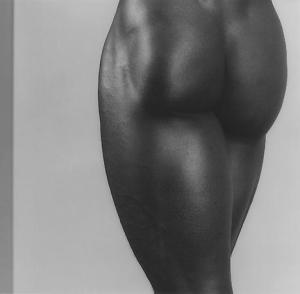 Some prefer to serve ham rather than turkey for Canadian Thanksgiving. Carve away, oh grateful citizens.

Mapplethorpe’s images were officially labeled art because of their aesthetic qualities, notably their technical proficiency, stunning lighting effects, and carefully constructed compositions. The content was itself unimportant, so claimed the sly lawyers. Good on them. In my opinion, there is a similar kind of aestheticization and even objectification of Ellison’s body in her images, though the resulting photographs are not as fine as Mapplethorpe’s. In the first image of her posted above, for instance, the fit lady is more like an object than a person; her sculpted body appears as a series of shiny parts in a compact, balanced composition. The scene is carefully lit and staged, becoming almost a still life instead of an athletic action shot. Presented as a work of art, Ellison emerges as a construction to be assessed and admired. She is no fleshly pregnant woman, subject to the forces within her, silently suffering from gas and piles, one hand lovingly resting on the womb that now dominates her embodied experience. Ellison is not passively “waiting” for something to happen to her, for her body to perform its biological function. In her images, the usual signs of fecundity—round breasts and protruding belly—become mere ornaments, like tail fins on a 1960s Cadillac. They might look good but are not necessary for the optimal operation of this well-oiled machine. In short, Ellison is not shown playing the prescribed role of “pregnant woman” (for more on this topic please see the April 2013 post called “Pregnancy and Engorged Womanhood” by Hissy Fit). This is what really pisses people off, whether they will admit it or not: being pregnant is not the be-all and end-all of Ellison’s life; it is not her greatest achievement.

It is therefore open season on Ellison. After all, how dare she deliberately put herself on display in this fashion? She is obviously asking for attention. In contemporary western culture, women are in an impossible situation. They are supposed to be on display at all times, existing primarily to be looked at. That is why they should never object to the constant visual assessments made by others; women should simply endure the snide sexualizing “compliments” made by unknown men in public or in the workplace. Such is their destiny and it’s really no big deal. Little girls usually get this message by age two if not earlier. All the same, girls, ladies, and Disney Princesses must never solicit the gaze of others, like prideful hussies. They should simply wait and accept what’s coming to them. Nor may women actively resist becoming an appearance. Such stupid bitches know nothing of the world and how it operates! Woe betide those who foolishly enter the public world of politics. But I digress: by posting pictures of her aestheticized body, Ellison potentially poses as a good woman on display, as nothing but a body, and yet still manages to defy gendered norms. Aligning herself with the supposedly negative “feminine” qualities of pride and vanity, she asks to be punished; she has gone a little too far and needs to be knocked back a bit. Luckily thousands of people are ready and willing to shoulder the responsibility of correcting and disciplining her.

Ellison provided a caption for her pics: “8 months pregnant with baby number 3 and CrossFit has been my sanity. I … strongly believe that pregnancy is not an illness, but a time to relish in your body’s capabilities to kick ass.” Her intentions are ultimately irrelevant. Words cannot stabilize the manifold meanings of the visual realm. The representations of Ellison are free-floating, referring to a host of other images of women, to dominant as well as some resistant definitions of gender, conveying different messages to different audiences. In the end, we do not shape our own image, or create our own realities. We become “ourselves” within given structures of meaning and must both recognize and grapple with them.

Blammo! That is what I actually shout when I kick the bag at Audrey’s studio.

Like Ellison, I am also a bad woman. Being pregnant is not my greatest achievement. I have done many things which were more difficult for me—like getting a PhD and writing a few books. Nor am I utterly fulfilled by the idea of impending motherhood. I was already happy with my life. I am in fact intrigued and slightly scared when I consider the future. It is not the sleepless nights and piles of dirty nappies that disturb me. I am frightened by the sheer weight of bullshit maternal conventions that will inevitably come crashing down on me. I cannot simply “decide” to ignore societal expectations. All the same, I am unlikely to receive the same criticisms as Ellison. Consider the accompanying image of me working out while pregnant. Despite jumping rope and then doing 60 push ups in close succession before punching and kicking the bag as hard as I can—activities that could also falsely be considered dangerous to “Foetor”—this picture of me will not cause a media frenzy. In contrast to the aestheticized images of Ellison’s taut body, I am covered up, chubby, and not particularly attractive in this photograph. I am not a brazen hussy vying for compliments (well at least not today). The shot is blurry and looks accidental. I am rather awkward and silly. I will not be receiving hate mail anytime soon. But your comments are always welcome!