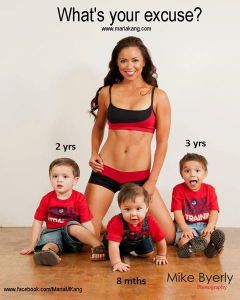 Tired of looking at this yet?

This month has witnessed a sustained hullabaloo regarding images of “fit” women. First there was the storm of controversy surrounding the photographs of Lea-Ann Ellison, a CrossFit aficionado shown lifting weights while 8 months pregnant, discussed in my previous post. Then things really got heated when Maria Kang, a 32-year-old fitness instructor, produced a poster of her scantily clad self towering above her three young children while challenging the viewer with the taunt: “What’s Your Excuse?” Attracting millions of hits and thousands of comments, many people felt bullied by this picture of a beautiful, young, and clearly fertile woman with washboard abs. Others admired Kang’s chutzpah, declaring that those who criticized her were likely lazy, fat “haters.” Surpassing the media frenzy inspired by Ellison, Kang received international attention, even appearing on major television talk shows. Despite the sheer quantity of dialogue, for the most part it was limited to asking audiences to take sides either for or against Kang. This lack of thoughtful engagement is par for the course in today’s world of unsophisticated journalism. Yet it was also predetermined by the dominant message encoded in Kang’s self-promotional poster. Her aggressive question “calls out” a particular kind of spectator, namely someone who does not work out and therefore looks nothing like Kang. Fit women, especially if they are also mothers, are positioned differently, invited to identify with Kang and take pride in their physical accomplishments while realizing that they are not like the “others.” The communicative structure of Kang’s advertisement divides women into categories: 1) those who perform their feminine roles to the fullest while nevertheless remaining toned and sexy, and 2) those who loudly proclaim that they are “too busy” to work out for whatever petty reason (i.e. the demands of motherhood) and are thus low-achieving slobs. Although Kang argued that she did not intend to send such a message, her poster both relies on and reinforces standard binary distinctions: us/them, fit/flabby, sexy/lazy, productive/unproductive. That is precisely why it received so many responses, many of them passionately angry. 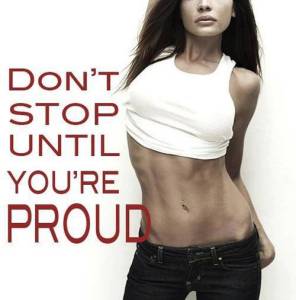 In contrast to Kang’s defense of her poster—“people will see whatever they want to see and I cannot control that”—a far richer discussion of fitspiration messages was articulated by Kevin Moore on his Reembody blog site, and then widely reposted. Moore, a pilates instructor, movement specialist, and concerned father, surveyed a range of supposedly inspirational fitness posters, and became very angry. He took issue with their consistent demand that women identify primarily with their appearance, defining strength in terms of a uniformly slender body achieved by pushing past pain and beyond perceived limits. Unlike many viewers of Kang’s advertisement, Moore looked closely at these images, realizing that the written texts were often at odds the messages encoded in the visual images, producing contradictions. Many slogans purported, for instance, to empower women with a new image of strength rather than skinnyness, and yet showed the same-old same-old pictures of thin women lacking signs of intelligence or personality. I thought that his most effective example was the poster pasted here, which shows an Angelina Jolie look-alike posing passively with a blank “fashion model” expression on her face. Please note that any reference to her brain has been removed, literally. We have all seen such photographs a thousand times, and we all have friends who try to imitate this look. Moore is right to point out that this conventional depiction of ideal womanhood is hardly novel; it refers to decades of similar images, no matter what the accompanying caption says. 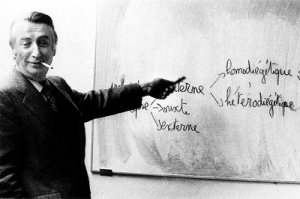 Roland Barthes did not give a fig about fitness.

According to the French cultural theorist Roland Barthes, the writing added to photographs or used in advertisements is meant to “anchor” the image in an attempt to determine its meaning. He noted that the visual realm is richly connotative and cannot be pinned down; images primarily refer to other forms of visual culture, and cannot be controlled by the textual realm. That is why Kang was not exactly wrong when she claimed that changing her poster’s slogan to read something ostensibly more positive, like “You can do it!” would not have changed the minds of those who responded negatively. The representation of her body and identity is so utterly conventional that it refers to ten thousand other messages that are shouted at women every day, telling them to lose weight fast, tone those arms, and cut down on junk food with two easy steps. [For my previous critique of fitspirational posters as aligned with neoliberal ideology, see the “The ‘Fat’ Female Body (in Pursuit of Happiness),” posted on 13 December 2012]. 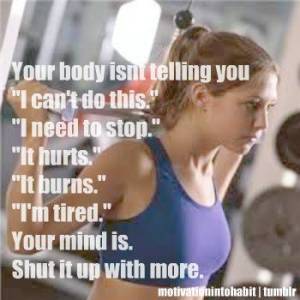 I don’t think that this image is quite as oppressive as many other Fitspirational posters.

Even as I admire the arguments of Kevin Moore, and find Kang to be willfully naïve about her participation in dominant visual culture, I could not really take up sides either for or against either of them. Unlike Moore, who decries messages that ask people to push beyond physical limits, I think that many people need to be called out, to be given a swift kick in the ass, in order to reach their full potential, and not just in terms of fitness. I suspect that some of my own students, for instance, would have benefited from higher academic expectations in secondary school, where it seems that everyone passes if they simply show up for class and/or hand in all the assignments, no matter how sloppily or shittily done. If these students are accepted into university, is it not my job to set a different course, to refuse their excuses, to force them to be better? I was pushed to my limits in graduate school and now thank all of my professors for being so critical of my writing and thinking. I am also grateful to personal trainers who made me lift heavier, and do more reps when I felt exhausted, my muscles failing. How will we identify our limits if we never try to achieve or go beyond them? This question is especially crucial in our contemporary consumer culture, where relaxation and bodily comfort are presumed to be natural states to which were are all entitled, rather than historically specific forms of embodied experience denied to many in the past (and still denied to most in the non-western world in the present). In the end, Moore presumes that there is a “natural” body that should exist without manipulation and outside of oppressive demands. While I do not accept this position, I agree that ubiquitous images of uniformly young, toned, and slender women are detrimental to everyone, not only women, but also delusional men who come to expect women to be passive, undemanding objects happy to be on display; such men will die alone in a cold grave wondering why life was so unfair.

Kang assumes that every woman wants to look like her, whether they admit it or not. In this case she is completely wrong. There are plenty of happy, strong, fertile, and otherwise productive women who deliberately refuse to cultivate long flowing locks, carefully made-up eyes, push-up bra tits, and a space between their thighs. Right now, I am participating in an academic conference at the Banff Centre for the Arts, and I can assure you that many women do not primarily identify with their appearance or their bodies; they have no desire to do planks while babies drop effortlessly out of their vaginas, like a Jane Fonda version of the Life of Brian. I say this as a pregnant woman who regularly does planks. All the same, I have personally been enjoying the freedom from normative ideals as my body expands and protrudes. In many ways I have never felt more comfortable in my own skin, in part because I am clearly not a sex object, hoping for positive appraisal from men, especially not those participating in the “Men’s Conference” at the Banff Centre. Though my pregnant belly could mark me as “taken” by a man—an assumption that I do not appreciate—it also signals that I am off-limits, outside of the sexual marketplace, and that is very refreshing. I wonder if Kang has ever felt this way? Maybe. But if not, I feel sorry for her.