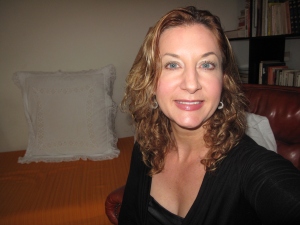 I took this selfie when I was alone in Paris in 2012, apparently in need of validation.

When I was downtown the other day, I saw three teenagers posing in a shopping centre, throwing gang signs—probably learned from a music video—while taking a group selfie. My first reaction was pity. How on earth could a trip to a seedy mall be considered a significant event worth recording? Then I realized my mistake. The resulting photograph was not the point. It was the act of performing for and taking the picture that was important to the teens, enabling them to transform a mundane occurrence into something meaningful. By taking a selfie the truants had both insisted that their lives held value and documented their solidarity. In addition to shaping their own identities, they had refused the dominant narrative of the mall by producing an image instead of consuming one. Maybe. Perhaps my analysis is a little naive? Discuss amongst yourselves. 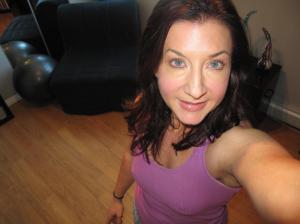 This is my personal facebook page selfie; it was taken about a year ago.

Without getting carried away, I would like to argue that selfies—photographs of oneself, typically taken by holding a cell phone high in the air while making pouty lips and a peace sign—could act as a form of resistance, allowing people (especially young people) a tiny window of subjectivity in a world that is largely scripted and often oppressive. And yet I sense that you have doubts, dear readers, and for good reason. Selfies are usually associated with narcissism, not political activism. [Aside: I have found that the two actually go hand in hand]. This narcissistic self-love only begets more narcissism because posting a selfie typically leads to superficial responses from others, in the form of either shallow compliments or vicious attacks. Despite these rapid reactions and the sheer plethora of selfies, hardly anyone takes this mode of cultural production seriously, not even scholars in the humanities. When I entered the search word “selfie” into academic databases, I came up virtually empty. Although numerous critiques have been proffered by journalists and bloggers, they tend to lack depth, focusing on the resulting photograph rather than on the act of making it. One exception is a post called “The Young Girl and the Selfie,” was written by Sarah Gram for her site Textual Relations: http://text-relations.blogspot.ca/2013/03/the-young-girl-and-selfie.html. Gram implies that the denigration of narcissism is in fact sexist, for a certain kind of self-obsession is demanded from young girls in order for them to become legible as girls. Girls and young women quickly learn that they will be primarily judged in terms of their appearance, regardless of any abilities they might possess. Willful girls who refuse to understand themselves as an image under constant scrutiny face punishment by and rejection from their peers. For a popular culture example consider Brienne of Tarth, who is often jokingly mistaken for a man in Game of Thrones. [Aside: I am in love with her]. In any case, that is why girls try to act the role of “girl” accordingly, and this act is, according to Gram, a form of labour which makes the female body into a useful object requiring the investment of time and money: “What characterizes the Young-Girl is that her body is a commodity, one which belongs to her and is her responsibility to maintain the value of. The concept of the teenage girl—a concept that actual teenage girls can inhabit more or less successfully—is a collaboration between industry and girls themselves. … The selfie is a representation of and an opportunity for the public recognition of that labour. The image may assert sexual subordination, but it still asserts.”

I appreciate Gram’s emphasis on the sheer hard work of becoming a girl. I think, however, that selfies can subvert the gendered ideal of “girlyness” as much as reconfirm it. Young girls often wear exaggerated make-up in their selfies, insisting—whether intentionally or not—on the masquerade of femininity, a la Joan Riviere. It is precisely this presence of “heavy” make-up that receives the most criticism, and spurs praise for a recent trend which had women posting self-images after removing their make-up. Guess what haters? Striving to become recognizably feminine is a heavy burden, and not exactly a choice. The selfies repeatedly produced by young girls reveal the continual, utterly unnatural, and mostly failed effort to achieve the ideal. 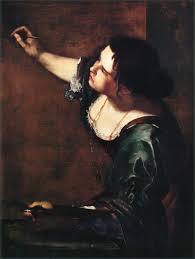 Artemesia Gentileschi, Self-Portrait as the Allegory of Painting; 1630.

Efforts to manufacture a simultaneously conventional and “unique” self are not new, dating long before the widespread use of photography. Consider, for instance, the self-portraits made by female artists during the early modern period. [Aside: You didn’t seriously think I could resist adding historical content to this post, did you?] Such women as painter Artemesia Gentileschi—please ignore those crap movies about her—and sculptor Properzia de’ Rossi were evaluated for their appearances as much as, or even more than, their artistic production. De’ Rossi was a marvel because her small, delicate lady hands could nevertheless carve the hell out of a marble slab. In order to counteract the usual stereotypes, and to dispel rumours that some man had actually produced the art work, she and other female artists had to demonstrate their manual skills before an audience. They also created images of themselves hard at work as a necessary form of self-promotion. In her self-portrait of 1630, Gentileschi portrayed herself as a divinely inspired and active painter, hair in disarray. I think that the contemporary digital selfies uploaded by young women share some similar goals, though the “work of art” is now the face and body of the girl herself. 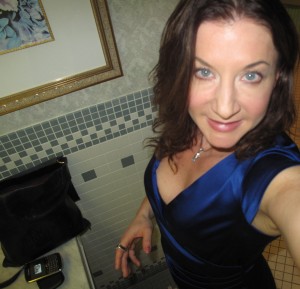 An aura of youthfulness can be achieved with the proper head tilt and lack of focus.

Although the vast majority of selfies are posted by women in their early ’20s, there are in fact numerous kinds of selfies, taken by different people for diverse reasons. An extensive scholarly study of selfies was performed by Professor Lev Manovich (coincidentally one of my graduate school colleagues) to compare the way the images looked according to the location in which they were taken. Manovich and his research team found that selfies followed specific conventions of angle, pose, and lighting that were dependent upon place. Is there a particularly Canadian kind of selfie? Have I been producing selfies in the Edmonton style? It would be interesting to consider the distinct geographical style of your own selfies, if you produce this kind of image. Please send these images and/or comments to this site to broaden Manovich’s findings.

I want, however, to return to my focus on making the images, rather than highlighting what they look like. According to my own experiences, the act of taking a selfie can be an end in itself, one that attempts to claim space. Let me explain: I snapped this final image at a holiday party that I was obliged to attend for my partner’s place of employment. Playing the role of “dutiful wife” (you can imagine how well that went) was even worse that year because my adored cat had died that morning. In order to escape from my partner’s increasingly drunk and lascivious colleagues, I went into the bathroom and took some photographs of myself wearing my new blue dress. This self-assertion made me feel better, even though I never showed the resulting images to anyone at the time.

What about the omnipresent fitness selfie? These pictures typically feature a “before and after” narrative, often showing people standing in front of a mirror in the gym, becoming more muscular and lean over time. Like the selfies discussed above, they are demonstrations of labour and arguments about identity, but in this case are also documents of progress. Photography is an essential and obligatory part of physique culture. One cannot prepare for a bodybuilding, physique, or figure competition without entering into the orbit of imaging and self-imaging. In this sense, selfies produce the fitness athlete and do not simply represent him or her. By taking such images, the competitor submits to visualizing technologies and agrees to be judged according to aesthetic criteria. I am not sure how these images could subvert the strict aesthetic conventions of fitness culture. Perhaps by showing the subject in an active rather than passive pose? Perhaps by highlighting unexpected parts of the body, like forearms, instead of the typical emphasis on biceps and abs? Perhaps my state of extreme sleep deprivation is now kicking in? Help me out by posting your responses and your own fitness selfies to this site.