It’s all my fault.

It’s hard not to get upset when you start back at the gym after a prolonged period away. I was off for two full months while recovering from a caesarean section, forbidden by my doctor from lifting anything over ten pounds. I was inclined to follow his advice after reading online descriptions of post-partum women who had ripped their stomachs open by training too soon after surgery. Although I had worked out seriously until I was 8 months pregnant, and then in a somewhat lame-ass way until two days before giving birth, I was shocked by how quickly my fitness level declined. Previously I had done shitloads of full chin-ups, but now I am back on the assisted pull-up machine, managing five sets of five slowly with 50 pounds of weight counterbalancing me. And as for full push-ups? Forget it. I have returned to my knees. How the mighty have fallen. It is truly humiliating.

I wonder if a few cheerful readers are thinking something like: “Don’t worry about it, FFG, you will bounce back in no time!” If so, I must respectfully request that they fuck off. Seriously: I train for ten years to gain strength and muscle, and it is gone in mere months? WTF? Is there any justice in the world? Apparently not. 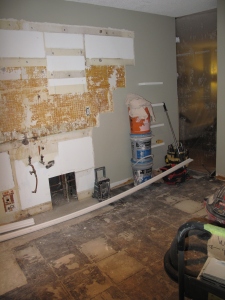 Who would be crazy enough to renovate a kitchen while 38 weeks pregnant?

Okay so my muscle is mostly still there, lurking under a new layer of fat. Again, this happened quickly. I ate well for the better part of my pregnancy and did not gain much weight. Until that ninth month. I was so very tired and my kitchen was gutted during a major renovation; I started to eat things that were forbidden, exciting, and unctuous, like pizza. I had never ordered pizza to my house before. I had to do research online to figure out how and from which company to order it. But then I ate about six of them, with chocolate bars for dessert. Yes entire family-sized bars! I am not even a chocolate lover [sorry Dutch Oven]. I most definitely prefer sex to chocolate, in defiance of that mythical survey in which women choose Hershey’s bars over orgasms. I stopped this fat-binging nonsense as soon as I gave birth, and lost about 40 pounds almost immediately [most of it was the water I had retained]. But I am still fatter than I was before, with a bizarrely protruding lower abdomen. I believe I have what is popularly known as “mommy tummy.” Argh. In some ways I am lucky, for I did not gain any stretch marks or varicose veins whatsoever during my pregnancy. Still, I absolutely resent this abdominal protrusion. Here I must admit to being a vain and silly woman. Of course, my adorable and surprisingly entertaining son was totally worth it. That is not the point. The point is that my embodied experiences remain visible on my body. I am human, hear me whine.

Oh no, I am not yet finished with the whining. “What’s my excuse?” you might ask. Well I have more than one. It is taking me longer than I thought it would to get back into shape because: 1) I am seriously sleep deprived. How can I do weighted bench jumps or reach a PRE (perceived rate of exertion) of 6/6 when I become exhausted and dizzy simply by walking to the gym? 2) My back is stiff and sore from constant breastfeeding. “Bring the baby to the breast, FFG, not the breast to the baby.” Yeah. Easier said than done at 4 am. You feel me? 3) My baby is easily inflated with gas. Early attempts at clean eating made my newborn son practically explode with farts. I am talking about loud, old man farts, the kind that wake you up when you hear them over the baby monitor. Poor little Turd Burgler [aside: that is what my LSP calls Sebastian, oddly enough]. I have learned that egg white omelets, Brussels sprouts, chicken, and oatmeal are basically poisonous to a breastfed infant. My son prefers it when refined carbs and fat fuel his liquid diet. What can I do? Sigh.

There is nevertheless a bright side to my slow efforts to get back into shape. Let me list the top three benefits: 1) I am reveling in the remembrance of how much I love working out. It is great to exert myself, feeling the weight of my body as I do triceps dips, or the thrill of an endorphin rush while teaching a spin class. 2) I am sore after my workouts. Now that I am relatively out of shape, I get DOMS pretty easily, which is a nice and physically satisfying change of pace. 3) Okay so I cannot think of a third positive point because it is mostly shit.

Additional rant: I want to send a big middle finger to Dr. Oz. I find him smug and smarmy at the best of times, but the other day he announced that exercise was over-rated because it does not help with weight loss. “Weight loss happens in the kitchen, not the gym,” he bellowed at 75 sedentary and applauding women. That pissed me off immensely. I can only imagine what Fitbabe thinks of it. First of all, Dr. Shithead, working out is often fun and wonderful, even for a tired, fat, 46-year-old new mom like me. Exercise is beneficial for many reasons and should never have been promoted as a “weight loss fix” in the first place. Training properly will lead to a fit, flexible, and muscular body, which will definitely be more attractive than a skinny fat one (if aesthetics are your main concern, which is apparently the case, Dr. Spaz).

8 thoughts on “Getting Back into Shape”

Leave a Reply to A. Cancel reply