On The Colony, a reality television show on the Discovery Channel, ten participants have to survive for ten weeks in a simulated post-apocalyptic environment. http://www.youtube.com/watch?v=6Hv4ADUr-0E

The real life survivalists on Doomsday Preppers on the National Geographic Channel prepare for a wide variety of possible apocalyptic scenarios: terrorist attacks, earthquakes, economic collapse, pandemics, fuel shortages, nuclear incidents, electromagnetic radiation, etc. Not only does this series show how Americans are getting ready for these disasters but their actions are analysed by experts who give them recommendations for improvements. Doomsday Bunkers also on Discovery follows a company called Deep Earth Bunker which builds custom shelters for those preparing for the apocalypse in its many forms.

These three reality TV shows are just the tip of the proverbial melting iceberg with many current television drama series also depicting post-apocalyptic scenarios. There might be a massive super flu that wipes out most of the world’s population (Survivors, BBC), a loss of global electricity that drives people back to the stone age (Revolution, NBC), a nuclear holocaust (Jericho, CBS), an alien invasion (Falling Skies, TNT), or the zombie apocalypse where everyone must run and fight for their lives when hordes of the undead have overtaken the planet (The Walking Dead, AMC), to name but a few shows produced in the last few years. 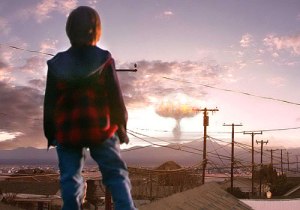 The nuclear apocalypse on Jericho: a most unrealistic scenario because if  you were this close to a nuclear explosion, you would likely not survive the fallout for long.

So what will it take to survive the supposedly inevitable upcoming Apocalypse? Television legend Joss Whedon, in his anti-Romney campaign ad, suggests that taking up parkour might be a good option. Or maybe you should sign up for a CrossFit course or something. 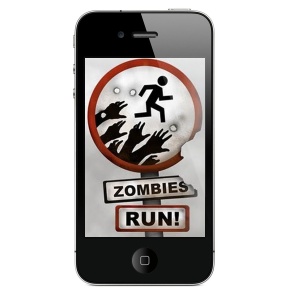 But will mere physical fitness be enough to survive? As evidenced on The Walking Dead, the ability to run very fast will certainly help in the case of a zombie apocalypse. To prepare you might want to purchase Zombies Run! Get Fit. Escape Zombies. Become a Hero: https://www.zombiesrungame.com/. This running app will “immerse you in an action-packed game [of] thrilling zombie chases that force you to speed up to escape the hordes!”

You could also partake in an increasingly popular zombie infested 5K obstacle course race:  http://www.runforyourlives.com/. However, running fast and clambering over obstacles won’t be enough. You will need to learn how to shoot guns and arrows, wield an axe, shovel, sword, or other implement to crush those zombie brains since this appears to be the only way to kill them. Upper arm strength will help with these endeavours but cunning and strategizing will also be required to find ammunition, food, water, heat, and shelter. However, mastering all of these skills does not necessarily mean that you will survive. You might need to sacrifice yourself, or be sacrificed by others, to be eaten by zombies to slow them down, allowing your comrades to escape as we have seen a number of times on The Walking Dead.

For those on Doomsday Preppers and Doomsday Bunkers rampant consumerism and wilderness skills are two important ways that one can prepare for the impending doom. Build a bunker, start stockpiling canned goods and water, and learn how to build a fire without matches or lighters. Some people have been hoarding goods in their bunkers since Y2K so they have had over a decade head start on the rest of us.

When you are putting together your survival posse and organizing your plan to flee from your urban centre, be sure to think about all the different types of skills that will be required. You will need not just those with physical, medical, and mechanical skills but also intellectual and strategic abilities. Might I suggest adding an artist to your group because we can be excellent creative thinkers and problem solvers? You might also want to consider moving to a much warmer climate because if the power goes off, never to return, it will be difficult to survive in a city like Edmonton, Alberta or in rural Montana for very long. A small, uninhabited tropical island would be the perfect place to build your bunker and hoard your consumer goods; since you won’t need to deal with zombies who apparently can’t swim, you will likely be sheltered from biological and nuclear threats, and marauders are unlikely to breach your shores. 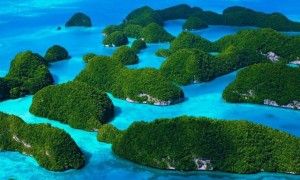 The Rock Islands of Palau might be the perfect spot

When you wake up on Saturday, December 22, hopefully around noon due a debaucherous night of pre-Apocalypse partying, and the Mayan Apocalypse hasn’t happened, a decadent brunch with mimosas and a wide variety of carb-loaded treats to celebrate is definitely in order. And instead of hitting the gym, because that likely won’t help that much when the real Apocalypse arrives, go back to bed, read some survival manuals and watch some post-apocalyptic TV. Not only will the psychological benefits of a day off be helpful but the skills learned through television cannot be underestimated when you need to strategize about how to get off that farm that is no longer safe when a huge herd of zombies shambles through.

2DO is an artist, independent curator, and art historian. She teaches independent non- credit television studies and art history seminars in her home in Edmonton, AB. Check out her upcoming seminars on The Supernatural in Contemporary Visual Culture (including one week about zombies) and Themes in Contemporary Art and Television: http://www.kh1art.ca/art-history-courses and https://www.facebook.com/events/348282358585348/

1 thought on “Guest Post: How to Survive the Apocalypse: Is Extreme Physical Fitness THE Answer?”